The Victorian era continues to prove popular for crime fiction series for younger readers. Holly Webb has joined other writers covering this period, such as Cora Harrison and Joan Lingard, by starting the Maisie Hitchins series aimed at six/seven to eight/nine year olds. The first two books The Case of the Stolen Sixpence and The Case of the Vanishing Emerald came out in May 2013 with a third, The Case of the Phantom Cat, due out in August. 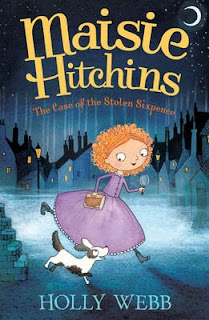 From best-selling author Holly Webb comes a brand new series full of mystery and intrigue following the adventures of a very determined heroine and her dog! Holly Webb fans will be thrilled to pieces to discover the adventures of Maisie Hitchins, the pluckiest little detective in Victorian London. Maisie Hitchins lives in her grandmother's boarding house, longing for adventure. She idolizes the famous detective, Gilbert Carrington, and follows his every case. But Maisie is about to be given the opportunity of a lifetime: her own mystery to solve! In the first book in this fantastic new series, Maisie rescues a puppy in peril whilst running an errand, and adopts him. She decides to investigate the puppy's original cruel owner, but instead gets tangled up in an intriguing plot involving stolen sausages, pilfered halfpennies and a fast-paced bicycle chase. The streets of Victorian London are never safe, but Maisie's on the case! 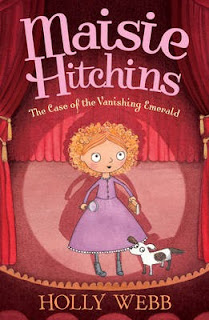 Maisie Hitchins lives in her grandmother's boarding house, longing for adventure. She idolizes the famous detective, Gilbert Carrington, and follows his every case. Together, with her faithful pup Eddie, Maisie is determined to follow even the slightest scent of a mystery - no matter what! Maisie can't help listening in when the famed star of the stage, Sarah Massey, visits a friend at the boarding house. Sarah is distraught - her beau, a mysterious young man, gave her a priceless emerald necklace, and it's now missing! Maisie is instantly intrigued, and decides to investigate the theatre. But nothing is what it seems in this world of make-believe...
Posted by Karen (Euro Crime) at 09:30