Lauren Child's (dedicated*) Ruby Redfort series began in 2011 with Look into My Eyes, with Take Your Last Breath published in 2012. The 2013 offering is as yet untitled. There has also been this for World Book Day - Hang in There Bozo: The Ruby Redfort Emergency Survival Guide for Some Tricky Predicaments.

This is not a series I've read yet but it is enjoyed by my reading group of 10-12 year olds.
* Ruby Redfort first appeared in the Clarice Bean novels. 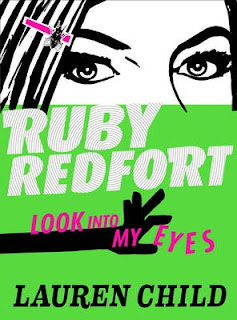 Hey, buster! Normal life is a total yawn. Break out of boredom with Ruby Redfort, the super-awesome new creation from multi-million-copy bestseller Lauren Child...Want to know more? Of course you do, bozo. Here's the low-down on Ruby Redfort: she's a genius code-cracker, a daring detective, and a gadget-laden special agent who just happens to be a thirteen-year-old girl. She and her slick side-kick butler, Hitch, foil crimes and get into loads of scrapes with evil villains, but they're always ice-cool in a crisis. In LOOK INTO MY EYES, we go right back to Ruby's beginnings as an agent. When an anonymous caller sets Ruby a challenge, it's not long before she finds her way into the HQ of the most secret of secret agencies - SPECTRUM. They need her help to crack a code but her desk job soon spirals into an all-out action adventure, as Ruby uncovers the dastardly plans of the formidable Fool's Gold Gang... 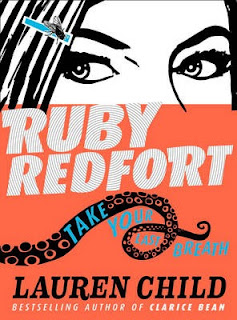 Everyone's favourite kid detective is back for a second mind-blowing instalment, packed with all the off-the-wall humour, action and friendship of the first book. This time, though, it's an adventure on the wide open ocean, and Ruby is all at sea...Can she crack the case of the Twinford pirates while evading the clutches of a vile sea monster as well as the evil Count von Viscount? Well, you wouldn't want to bet against her...
Posted by Karen (Euro Crime) at 09:00