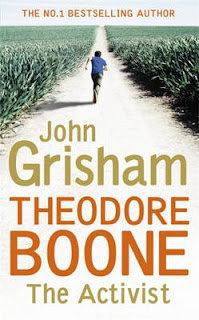 Thirteen-year-old wannabe lawyer Theodore Boone is back in his fourth adventure The Activist. The politicians for Theodore's home of Strattenburg want a bypass around the town to alleviate congestion. The plan is a controversial one and soon becomes personal to Theodore when his friend Hardie asks for his help. Hardie's family home and its substantial acreage, lie in the path of the proposed bypass and the US equivalent of a compulsory purchase order will be enacted, destroying it.

Theodore is pushed into helping Hardie after a violent confrontation with contractors on Hardie's land. Theodore works with the environmental group to fight the bypass. In addition he obtains some illegal information which would win the fight - but should he use it?

The Activist takes it time to get to the actual protesting as we follow Theodore briefly through a debating contest (ultimately relevant) and a lengthy scouting outing where Theodore is for once not portrayed as the golden boy (not so relevant). Overall however it is an uplifting tale if not totally plausible which should inspire younger readers. Aside from the disappointing The Abduction, the other three books in the series have been of a similar, solid, standard. We've had murder, kidnapping, victimisation. What's next for Theodore Boone and will we ever find out the reason for his uncle's disgrace?

There are some moral dilemmas in The Activist and the book includes a series of questions on these to spark further discussion.

As usual this is marketed at both teens and adults though the writing is aimed at slightly younger than teen I feel. Theodore knows the law but has to have the term bypass explained to him; he's also not a very fast cyclist as it takes him and April thirty minutes to cycle one and a half miles...ie walking speed.

Read my reviews of the first three books here.
Posted by Karen (Euro Crime) at 09:00