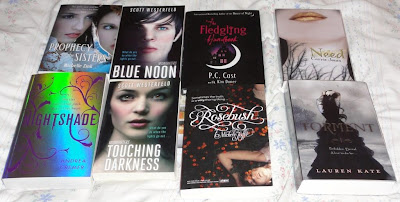 Need by Carrie Jones
Zara collects phobias the way other high school girls collect Facebook friends. It's little wonder, since she's had a fairly rough life. Her father left when she was a baby, her stepfather just died and her mother's almost given up - in fact, she's sent her to live with her grandmother in cold and sleepy Maine to 'keep Zara safe'. Zara doesn't think she's in danger; she thinks her mother just can't cope. Zara's wrong. The man she sees everywhere - the tall, creepy guy who points at her from the side of the road - is not a figment of her imagination. He's a pixie. But not the cute, sweet kind with little wings. Maine's got a whole assortment of unbelievable creatures. And they seem to need something - something from Zara...

Torment by Lauren Kate
In Torment fallen angel Daniel and his mortal love Lucinda think they are safe but evil forces are massing against them. As Luce learns more about her past, and discovers that the lives she’s already lived hold the key to her future happiness; she starts to wonder if Daniel has told her the whole truth. What if his version of events isn’t the way things happened? What if that means that she’s really meant to be with someone else?

Nightshade by Andrea Cremer (Dec)
She can control her pack, but not her heart ...'I wanted him to kiss me?wished he could smell the desire that I knew was pouring off me. You can't, Calla. This boy isn't the one for you.' Calla Tor has always known her destiny: graduation, marriage and then a life leading her pack. But when she defies her masters' laws to save a human boy, she must choose. Is one boy worth losing everything?

Rosebush by Michelle Jaffe (Mar 11)
Jane is found, near death, in a rosebush ? a victim of hit and run. But as she's convalescing she realizes that her friends' stories and her memories of what happened that night aren't adding up. And now the only thing she does know is that one of her friends isn't so friendly. One of them tried to kill her. Sometimes the truth is a very thorny thing...

The Fledgling Handbook by PC Cast & Kim Doner
Merry meet, fledgling. I trust this guide will serve you well...Every vampyre fledgling who arrives at the House of Night receives a copy of The Fledgling Handbook 101, and now, fans can have one, too, with this gorgeous must-have edition. Inside you'll find original stories, the complete vampyre history, inside info into rituals, vamp biology, and the Change, and much more.

Prophecy of the Sisters by Michelle Zink
Without the Keys, something terrible will happen. Something that cannot be undone. And with them, I might bring an end to the riddle of the Prophecy and my strange part in it. If Alice and I are on conflicting sides of the Prophecy, the Keys would be dangerous in her hands. Which means I have to find them. And I have to do it before my sister. This is the story of sixteen-year-old Lia Milthorpe's quest to discover her role and her twin sister's in a powerful prophecy that has affected twin sisters for generations. But nothing can prepare her for what she discovers - about herself, about her family, and about the danger that goes from haunting her dreams to becoming her reality.

Midnighters: Touching Darkness by Scott Westerfeld
Imagine falling for someone who can fly you through the air. Imagine loving someone who can see your darkest thoughts. Imagine having secrets that could destroy the things you cherish ...Midnight in Bixby hides more than one secret, and uncovering them will put Jessica and her friends in more danger than they could have imagined. The Midnighters aren't the only ones seeking truth in the darkness. And if the group allow their own secrets to come between them they risk losing one of their own - forever.

Midnighters: Blue Noon by Scott Westerfeld
The secret hour is beginning to crumble and the darklings are preparing to feed for the first time in centuries. The Midnighters look to Rex for a plan, but his dark side is threatening to overpower him. Melissa can taste his animal instincts leading him into taking greater and greater risks. But as Bixby faces the darklings' hunger, will it be Rex or another Midnighter who will to make the final sacrifice to save the ones they love?
Posted by Karen (Euro Crime) at 18:49