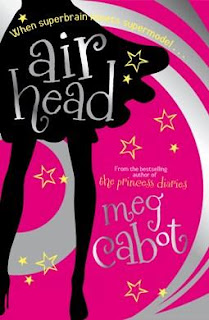 First Lines:
"Emerson Watts," called my first-period Public Speaking teacher, Mr Greer, startling me from the light doze into which I'd drifted.

Well, whatever. Do they really expect us to be alert at eight fifteen in the morning? Come on.*

Review: Airhead is the first in the Airhead trilogy. Book two, Being Nikki is now available in the US (September in the UK) and book three Runaway will be out in May 2010 (US).

Em Watts is a straight-A student who couldn't care less about fashion and whose best (and only) friend is Christopher and they hang out together playing a computer game, Journeyquest. Nikki Howard is the world's most famous teenage model and the face of Stark Enterprises.

Nikki and Em's worlds collide when they both attend the grand opening of a Stark megastore in Manhattan where a bizarre accident leaves Em living Nikki's life. Though Em is less than pleased about it. Can Em cope with Nikki's busy career demands, the numerous boyfriends and worst of all not being able to be friends with Christopher whom she now realises is "the one"?

I loved Meg Cabot's 1-800-Missing series so it's no surprise that I enjoyed Airhead. Airhead has a dash of fantasy/science-fiction, plenty of romance and humour and the beginnings of a mystery plot. There are some serious issues touched on, such as where does your identity lie?, but in the main it's a 'fish out of water' romp. Em is likeable as are most of her new friends, Lulu and Brandon who are FFBFs (Famous For Being Famous) and there are some peeks at the demanding life of a model.

Airhead paves the way for the next two books and I can't wait to read Being Nikki.

Cover: Fun cover, showing this is a quite light-hearted book. I quite like the fact that there isn't a model on the front, unlike the US cover, as this doesn't give a preconceived idea as to what Nikki looks like.