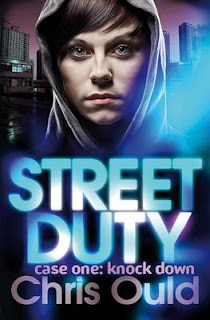 Victim: teenage female (13-14?). Unconscious. Head injury, laceration to arm. Struck by lorry. Driver present at scene. Possible victim ID = Ashleigh Jarvis. Bus pass + purse in pocket. No shoes. Feet dirty. When Ashleigh is taken to hospital following a traffic accident, an examination of the unconscious girl reveals injuries that suggest a disturbing series of events prior to her being knocked down. Ashleigh has been keeping a dark secret - and sixteen-year-old Trainee Police Officer, Holly Blades, will stop at nothing to discover the truth. Gritty, electrifying drama from BAFTA award-winning writer, Chris Ould: the freshest blood in YA crime fiction. 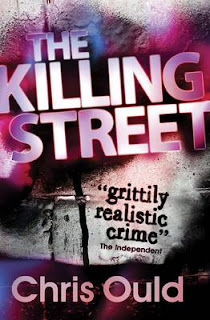 Gemma loves Dean, but he's making her do things that she doesn't want to do. Ryan did a deal to join up with the Kaddy Boys, but now he's in, there's no getting out. Taz is being paid to be an informant for the cops, but is she getting too close to the targets? And when Trainee Police Officer Holly Blades attends her first suspicious death, is she really ready for the impact that being a copper can have on your family, your friends and your life? Especially when you know one of the suspects...
Posted by Karen (Euro Crime) at 10:00