Bloomsbury Publishing is delighted to announce the acquisition of World English rights for two young adult novels by Nick Lake, author of In Darkness, winner of the 2013 Michael L. Printz Award and shortlisted for the Carnegie Medal.

The as-yet-untitled first book, a literary thriller, will publish in the US, UK, and Australia in 2014. It follows Shelby Jane Cooper, whose life is turned upside-down when she is hit by a car and discovers everything she knows about herself and her family might possibly be a complete and utter lie. As she is drawn into an increasingly complicated, foreign reality, she must grapple with tough questions about the past, the future, and ultimately who she can trust. Lake's emotionally charged story also challenges the reader to decide between fact and fiction in Shelby's world as it twists and turns throughout the narrative to its shocking conclusion.

The novel will be supported by a major global marketing plan, including an international author tour. Lake's second novel in the new deal will publish globally in 2015.

Read the rest of the article here.

Shadow by Amanda Sun is currently free at the Harlequin website. They provide it as an epub. A kindle version is also available (UK price is £1.59). 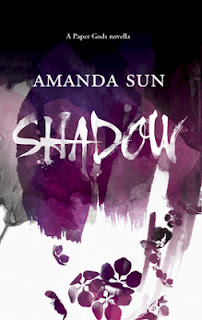 Meet two teens whose worlds are about to change forever in this paranormal Young Adult novella, a prequel to Ink by debut author Amanda Sun...

Katie Greene's worst nightmare comes true when her mother dies, and she's devastated to learn that she will have to leave the only home she's ever known. Desperate to find where she belongs, she must decide if she has what it takes to start a new life across the ocean.
For Yuu Tomohiro, every day is a nightmare. He struggles to control his strange ability, and keeps everyone at a distance so they won't get hurt--even his girlfriend, Myu. At night, a shadow haunts his dreams, and a mysterious woman torments him with omens of death and destruction. But these haunting premonitions are only the beginning...

Don't miss the moment when Katie's and Tomohiro's worlds collide in Ink, book one of The Paper Gods series from Harlequin TEEN.
Posted by Karen (Euro Crime) at 21:27 1 comment:

It's currently National Crime Writing Month and I'm very pleased to welcome Sam Hepburn, author of Chasing the Dark, to the blog, where she'll be discussing why are crime thrillers are so popular with YA readers? 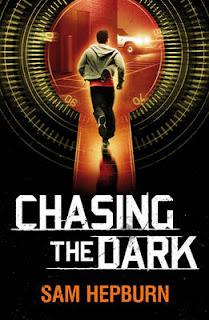 Joe's mum is dead. Killed in a hit-and-run car crash, along with someone he's never heard of. Angry and alone, Joe takes his dog for a late night walk. He finds himself at the gates of an empty mansion: a house of glass belonging to an old movie star. And it's here that Joe unlocks the dangerous mystery of what happened that night...

Chasing the Dark is published on 6 June 2013 by Chicken House.


Why are crime thrillers so popular with YA readers?

Of course, just like adults, YA readers love escaping into great, gripping stories. But a crime thriller offers them something that other genres can’t – a chance to see justice done. In the words of Nick Elliot, former head of BBC drama series:
‘Crime fiction satisfies in us a secret yearning for justice, the unappeasable appetite for a fair world, which begins in childhood and never leaves us. It satisfies our need for conclusions, both moral and narrative.’
That need for justice has added resonance for young adults who are still smarting from the petty injustices of childhood as they step into the crazily confusing and fundamentally unfair world of adulthood. If they feel helpless in the face of the crime, chaos, danger and injustice all around them, a crime thriller can give them a real sense of empowerment. With its structured form, clear distinctions between good and evil, right and wrong these novels provide them with a refreshing respite from the fudgy ambiguities of real life. However fiendish the mystery and however duplicitous the characters, by the end of the story the truth will always be revealed and the villain will always be punished.
Crime thrillers also deal with a topic that is almost too scary for teenagers to contemplate – death. However, in a crime novel it comes neatly packaged with an explanation arrived at through logic and reasoning which, just for a moment, makes the terrifying and incomprehensible idea of mortality just a little more acceptable.
Today’s young adults have grown up in an interactive digital world and unlike other genres crime fiction gives them a unique opportunity to interact with the story. These books invite them to follow the clues, form their own theories, attempt to stay one step ahead of the sleuth and avoid the author’s attempts to misguide them. They may get it wrong, they may kick themselves at the end for missing the obvious but that active involvement provides a key part of their pleasure.
As an author of crime fiction featuring a teenage detective I have also realised that there is a fundamental difference between YA crime fiction and crime fiction featuring an adult police detective or a private investigator working for a wealthy client. The teenage protagonist is an amateur with no easy access to sophisticated forensic techniques, cell site information to track mobile phones, DNA analysis, fingerprint testing, or police records. So, just like Miss Marple, Sherlock Holmes, Hercule Poirot and the great fictional detectives of the past they are forced to rely on their wits, intuition and powers of deduction. This makes for a very different type of investigation, one that the YA reader feels that they just might be able to carry out themselves. I’m sure that this, and the fact that the teenage sleuth is a character they can readily identify with are additional factors in the ever increasing popularity of YA crime thrillers.
Many thanks to Sam Hepburn and Chicken House for arranging this guest post.
Posted by Karen (Euro Crime) at 09:00 No comments: