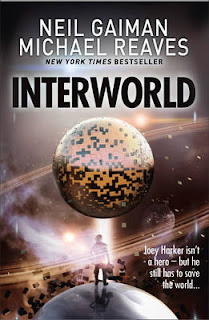 Interworld is the first in a new science-fiction series and introduces Joey Harker, most famous for getting lost. A school project by an unorthodox teacher has the students dropped off around town in groups, and told to find their way to a certain point. Joey, initially confident, to impress one of his female companions soon has them lost and when he goes ahead enters a mist. When he comes out of the mist things are slightly different and he when he gets back to his home he finds that's changed and his mum doesn't recognise him. He's then attacked by people on hover-boards and is subsequently rescued by a someone in a space-age suit who sounds awfully familiar but whose identity is concealed. Joey runs, as instructed, and finds himself lost and not just geographically...

It seems that Joey is a Walker who can walk between worlds – worlds that can appear when an important decision is made – two choices – two worlds – and that he, along with all the other variants of Joey, is needed to help maintain the balance between two very different groups who want to control all the worlds.

Interworld is a classic story told against a SF background. Joey, initially gauche and not that bright finds a purpose and through training becomes stronger and cleverer and ultimately a leader. Along this journey he faces antagonism from his Walker peers, rejection, before a reluctant acceptance and a future.

Interworld is a quick read and is based on a tv premise that Neil Gaiman and Michael Reaves tried to sell over fifteen years ago. I'm not sure that the tv, at least at that time, would have been able to do visual justice to the crazy worlds that the story visits. I quite enjoyed Interworld, though I found Joey's transformation a little implausible, and I also didn't find I was immersed in it as much as I should have been, due to a lack of depth in the world-building and an uneven tone. Nonetheless I shall read the sequel The Silver Dream (out now). The third part of the trilogy will be out in 2014.
Posted by Karen (Euro Crime) at 09:30