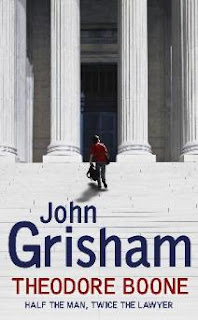 First Line:
Theodore Boone was an only child and for that reason usually had breakfast alone.

Review: Theodore Boone is the first in a series of young adult novels by best-selling thriller writer John Grisham. Theo Boone is thirteen years old, extremely bright and born into a family of lawyers. He can't decide whether to be a lawyer or a judge when he grows up and is already offering free legal advice to his class-mates.

Theo lives in Strattenburg and a most dramatic trial is about to take place. Pete Duffy is on trial for the murder of his wife at their exclusive gated-community home.

The trial will be a battle of wits between two top lawyers and Theo is desperate to follow it. However not only is he going to be observing the action but he will play a crucial role in the trial's outcome...

I enjoyed Theodore Boone. Theo is a likeable character who is not afraid to hand over the tricky problems to the adults, whilst keeping his promises to his confidants. This is quite a cozy almost idealistic read - Theo's family is liberal and help out in the community, Theo travels everywhere by bike, all the Courthouse staff love him and rather than being bullied at school his expertise is sought. The plot is quite straightforward but holds the interest nonetheless. The writing is quite simple and seems to be aimed at younger teens eg Theo explains mortgages at one point. There is a slight overuse of the term 'pecking' in relation to keyboards!

Readers will pick up plenty of knowledge about US law and may even be inspired to a legal career. Theo and his family are the characters most explored but I hope that Theo's friend April features more in the next book - as yes there is a sequel, which I'm glad about as there are many questions left unanswered at the end.

NB. This book is being produced in both adult and YA editions.
Posted by Karen (Euro Crime) at 19:05