The children's reading group that I oversee and co-host at the library is in its second year now. After a few meetings the idea of setting just one book wasn't very popular so we have moved to a themed approach. The meetings are now every other Saturday so that's a lot of themes in a year! One suggestion we had was for a Birthday theme and I had to scratch my head a bit for that one. My twitter friends came up with some great suggestions but they weren't available in the library but I persevered with google and amazon and I now have a short list of birthday-themed books that can be readily-(ish) found in the UK:

A Bean Birthday by Betsy Byars

Some of the dated covers provoked a few giggles! Further suggestions welcomed!
Posted by Karen (Euro Crime) at 20:43 No comments:

Great news, here's the cover and blurb for A Midsummer Tights Dream, the sequel to Withering Tights by Louise Rennison. Published 2 February (earlier than I was expecting) myself and the members of my reading group will be delighted to read this. There was much disappointment when the group read it as part of a Wuthering Heights themed selection that the sequel wasn't available there and then. 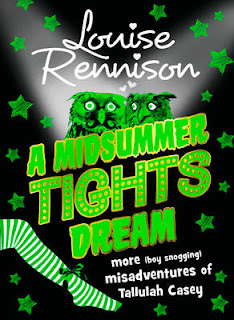 It's the hotly anticipated sequel to the winner of the Roald Dahl Funny Prize, WITHERING TIGHTS -- laugh your tights off as Tallulah Casey and her bonkers mates return for a new term at Dother Hall performing arts college. Boys, snogging and bad acting guaranteed! Yaroooo! Tallulah's triumphant Heathcliff in 'Wuthering Heights' the comedy musical was enough to secure her place at Dother Hall performing arts college for another term. She can't wait to see her pals again, Charlie and the boys from Woolfe Academy and maybe even bad boy Cain! Could the bright lights of Broadway be calling? And for who? Find out in the next Misadventures of Tallulah Casey.
Posted by Karen (Euro Crime) at 14:31 No comments:

Review: The Case of the Cryptic Crinoline by Nancy Springer (audio book) 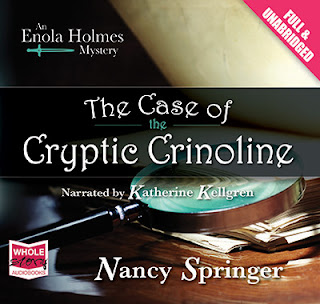 Review: The Case of the Cryptic Crinoline is the fifth in this series which features Enola Holmes, younger sister to Sherlock. Enola is now fourteen and is living with her elderly and deaf landlady Mrs Tupper, under an assumed name. She has run away from home to avoid being sent to boarding school.

The reader has met the young Mrs Tupper in the prologue where she had accompanied her husband to Scutari (Turkey) during the Crimean War and where subsequently her husband became mortally ill and was tended to by the "Lady with the Lamp", Florence Nightingale.

Thirty years later in London, Mrs Tupper is sent a mysterious note demanding she hand over a message. Mrs Tupper has no notion of what the missive means but the letter-writer does not accept that and kidnaps the old lady and ransacks her home.

Enola, who sees Mrs Tupper as family - in part replacing her own missing mother - must solve the mystery and find Mrs Tupper before any harm befalls her. Her adventure has her mixing with high society and avoiding and outwitting her own brother from time to time.

I really enjoyed The Case of the Cryptic Crinoline which has an independent, clever teenager as its heroine. Written by an American, the language sounds authentically British and is quite sophisticated. The plot is quite complicated - I'm not sure I fully understand the why but the who and what is clear enough and I like how it introduces the reader to the Crimean War and Florence Nightingale which may lead to further reading on those topics. There is an ongoing mystery regarding the disappearance of Enola's mum - is she alive still? I look forward to finding out more. There is an excellent scene near the end where Florence Nightingale explains to Sherlock Holmes the horror of corsets and boarding schools!

It's a shame that the first one in the series available in the UK is the fifth but at least the sixth, The Case of the Gypsy Goodbye, will be out on audio book in February.

Like the author, the narrator is also American but she narrates in an almost flawless English accent, only tripping-up over words like "shone" and "perseverance". Her regional accents are equally well done and her Florence Nightingale is a charm.

More Sherlock Holmes related series for children can be found here.
Posted by Karen (Euro Crime) at 10:30 No comments:

Free e-book of The Thief by Sophie McKenzie

You can now download the pdf or read online, Sophie McKenzie's The Thief which was a 2010 World Book Day special and can only be bought second-hand now (and my library has *1* copy of!). 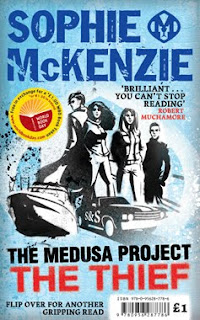 The Thief is a bonus Medusa Project story, originally written for World Book Day 2010 but no longer available to buy.

The events in this special story take place between The Hostage and The Rescue, but The Thief can be read as a stand-alone story.

The Thief stars the four Medusa teens, Nico, Ketty, Ed and Dylan. Following the explosion that ended The Hostage, the teens are sent to a boot camp in Spain - to learn some discipline, but also for their own protection. On the way there, the group are attacked and forced to carry out a high-risk diamond theft...
Posted by Karen (Euro Crime) at 08:30 3 comments:

Here are some of the teenage/YA titles that are being published in the UK in January 2012. I will put a link to this post and previous and subsequent "monthly" lists in my sidebar.

Monthly lists for 2011 can be found here.

I have tried to identify all the British authors which I hope will be useful to those doing Kirsty's British Books Challenge at The Overflowing Library.

The stand out read was: