I recently posted my review of Bear Grylls' THE BLIZZARD CHALLENGE on my library's Facebook page: 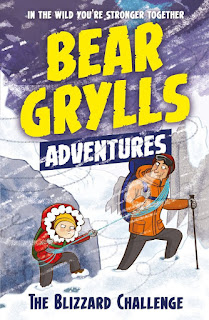 THE BLIZZARD CHALLENGE is the first in the Bear Grylls Adventures series aimed at younger children.

In this first book we meet Olly who has been sent off to an adventure camp with his friend Jack. Jack loves this type of thing but Olly would rather be at home with his tv and creature comforts.

The boys are teamed up with Omar, who doesn’t think much of Olly and his impatient attitude soon has Olly deciding to wander off and leave his team to get on without him. Olly is then given a compass by a girl. The compass seems to have a fifth direction though he cannot read it.

Omar is not happy with Olly for abandoning him and Jack, and there’s a tense atmosphere in their tent. As Olly is trying to sleep, a cold wind blows through the tent and when Olly goes to close the door tighter he finds himself in the snowy mountains with a man called Bear.

Bear and Olly must team up and get away from the approaching storm. They will only survive as a team. During his adventure with Bear, Olly will learn some survival lessons and also how he can push himself to do better and how we are stronger together.

This is a short book with quite simple language with more difficult words explained by Bear eg hypothermia, and it shows the benefits of team-work whilst telling an adventure-filled story. It includes illustrations, provided by Emma McCann. The target audience is around 6+.
Posted by Karen (Euro Crime) at 09:30 No comments: 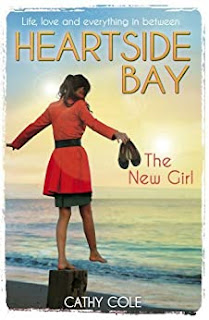 As you may have seen Amazon are offering a number of free ebooks for children/young people at the moment. I recently spotted that Cathy Cole's first Heartside Bay book, The New Girl, was included in the freebies.

I reviewed books one and two here.

Download The New Girl here.
Posted by Karen (Euro Crime) at 09:00 No comments: 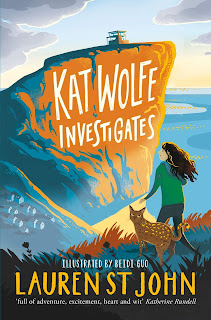 KAT WOLFE INVESTIGATES, the first in a new series from Lauren St John, won CrimeFest’s, Best Crime Novel for Children (8-12) last year. And I loved it too.

After an unpleasant incident in their London home, Kat's mum, a veterinary surgeon, and Kat relocate to a slightly mysterious job in an idyllic Dorset sea-side town called Bluebell Bay. One of the conditions is that they take on the previous owner's cat, which is no ordinary British Domestic Shorthair... Plus Dr Wolfe has to be able to treat monkeys at the local sanctuary.

As it's the school holidays Kat is soon running her own small business – pet sitter for hire, and meets a temporarily housebound American girl of her own age (12) who has been thrown and badly injured by the very horse that Kat is to look after. Kat also offers to look after a parrot whose Paraguayan owner is returning home for a while. This latter job is what instigates an involving adventure with international implications.

This is a very rich book, with quite a complicated storyline. I don't want to say anything more about the plot but it is I think, quite an unusual story for this age group. Kat is a great animal-whisperer and not surprisingly her and her mum are vegan. She has a good heart and those around her respond to it. This book beams with good messages, has an exciting story and is quite funny as well.
Posted by Karen (Euro Crime) at 08:32 No comments: