I was very lucky to be able to go to Orion's Indigo imprint launch party for bloggers last week and they kindly gave out arcs of the first books to be launched in September. I'd have loved Sally Gardner's new book, The Double Shadow but demand outstripped supply :). 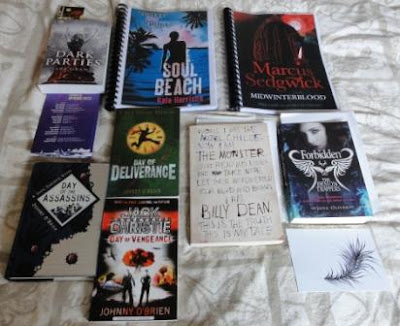 Not shown! Be assured that I've taken several books out this week (the benefit of a staff ticket) but it's been a hectic week and I've rather lost track of which ones, except for Jenny Han's It's Not Summer Without You.

Dark Parties by Sara Grant (debut & currently a standalone) (20 October)
Neva keeps a list of The Missing - the people like her grandmother who were part of her life but who have now vanished. The people that everyone else pretends never existed. In a nation isolated beneath the dome of the Protectosphere - which is supposed to protect, but also imprisons - Neva and her friends dream of freedom. But life is becoming complicated for Neva. She's falling for her best friend's boyfriend - and she's learning more than she ever wanted to know about what might be happening to The Missing...

Soul Beach by Kate Harrison (1 Sep) (#1 trilogy)
When Alice Forster receives an email from her dead sister she assumes it must be a sick practical joke. Then an invitation arrives to the virtual world of Soul Beach, an idyllic online paradise of sun, sea and sand where Alice can finally talk to her sister again - and discover a new world of friendships, secrets and maybe even love . . . . But why is Soul Beach only inhabited by the young, the beautiful and the dead? Who really murdered Megan Forster? And could Alice be next? The first book in an intriguing and compelling trilogy centred around the mystery of Megan Forster's death.

Midwinterblood by Marcus Sedgwick (6 Oct)
Have you ever had the feeling that you've lived another life? Been somewhere that has felt totally familiar, even though you've never been there before, or felt that you know someone well, even though you are meeting them for the first time? It happens. In 2073 on the remote and secretive island of Blessed, where rumour has it that no one ages and no children are born, a visiting journalist, Eric Seven, and a young local woman known as Merle are ritually slain. Their deaths echo a moment ten centuries before, when, in the dark of the moon, a king was slain, tragically torn from his queen. Their souls search to be reunited, and as mother and son, artist and child, forbidden lovers, victims of a vampire they come close to finding what they've lost. In a novel comprising seven parts, each influenced by a moon - the flower moon, the harvest moon, the hunter's moon, the blood moon - this is the story of Eric and Merle whose souls have been searching for each other since their untimely parting. Beautifully imagined, intricately and cleverly structured, this is a heart-wrenching and breathtaking love story with the hallmark Sedgwick gothic touches of atmosphere, blood-spilling and sacrifice.

The first three in the Jack Christie series by Johnny O'Brien in preparation for a blog tour in September. Day of Vengeance, #3 is out 1 August:
Schoolboy time-traveller Jack Christie is thrown back to 1940s Nazi-occupied France. With the Battle of Britain and the German Vengeance programme underway, the Second World War is at a crucial point. Jack and his best friend Angus take a more senior role in VIGIL's attempts to prevent intervention in history, attempting to stop the Revisionists from their highly volatile nuclear plan to stop the war. With spitfire dogfights, jeep races and thrilling chases, the boys have their most hair-raising adventure yet, including involvement in an assassination attempt on Hitler himself. Just as all seems lost, Jack's father returns and a nuclear disaster is averted in the nick of time.

The True Tale of Billy Dean by David Almond (1 Sep) (adult novel)
This tale is told by 1 that died at birth by 1 that came into the world in days of endles war & at the moment of disaster.

Billy Dean is a secret child, growing up in the dark heart of Blinkbonny. He has a beautiful young mother and a father who arrives at night carrying the scent of incense and cigarettes. His world is just a bed, some pictures of the holy island and a single locked door, but his father fills his dreams with mysterious tales and dreadful warnings.

When his father disappears, Billy's mum brings him out into the world, and he learns the dreadful truth of what happened in Blinkbonny on the day he was born. Gradually he finds he has the gift of helping to rebuild what has been broken. But there is one figure who is beyond healing, who comes looking for Billy himself and is determined on a kind of reckoning.

I am Billy Dean. This is the truth. This is my tale.

David Almond's extraordinary first novel for adults is the story of a child, born of sin, who emerges into a post-industrial, almost apocalyptic world where the force of his innocence is tested to the extreme.

The Demon Trappers: Forbidden by Jana Oliver (1 Aug)
Riley’s beginning to think being a demon trapper isn’t all it’s cracked up to be. Her dad’s been stolen by a necromancer, her boyfriend’s gone all weird and she’s getting warm and fuzzy feelings for someone who’s seriously bad news. It’s tempting to give it all up and try to be normal, but that’s not an option.

Because the demons have plans for Riley.