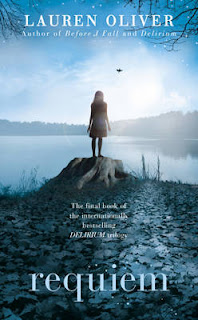 Lauren Oliver talks to Michelle Pauli about the third and last book in her Delirium trilogy, Requiem. It is set in a world in which "love is a contagious disease".
Posted by Karen (Euro Crime) at 12:19 No comments: 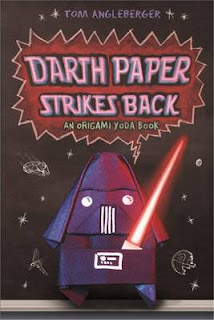 Review: Darth Paper Strikes Back is the middle book of the (first?) trilogy by George Lucas Tom Angleberger and we return to McQuarrie Middle School and most of the characters featured in The Strange Case of Origami Yoda. Tommy, the main narrator, is still doubting whether his friend Dwight's finger puppet of Yoda is actually channelling 'The Force' of whether it is Dwight's wisdom that he and his friends are making good use of. Another pupil, Harvey, has a competing finger puppet Darth Paper which is trying to lead people over to the dark side.

When 'Yoda' goes too far however, advising a fellow student that she is doomed, a complaint is made to the Principal and Dwight is suspended and threatened with reform school. Origami Yoda makes a plea to Tommy to make a casebook to save Dwight.
Like the previous book, Darth Paper Strikes Back is mostly a collection of anecdotes from pupils on how Dwight/Yoda helped them out in tricky situations which include this time: coping with an unclean student, an annoying child at the skate park and raising funds for the school. These stories are bookended by Tommy's narrative.
I enjoyed Darth Paper Strikes Back very much. I love all the Star Wars references made by the characters and the doodles/drawings in the “casebook”. The individual stories are interesting and it's all very wholesome and heart-warming, culminating in an unexpected ending. The third part of the trilogy, The Secret of The Fortune Wookiee, is out now and Art2-D2's Guide to Folding and Doodling is out this month (April 2013).
[An attempt to make a Darth Paper to go with my Yoda is on my to-do list.]
Follow my blog with Bloglovin