Review: The Case of the Good-Looking Corpse by Caroline Lawrence 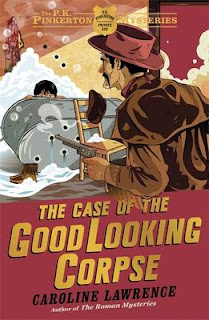 The Case of the Good-Looking Corpse takes place straight after The Case of the Deadly Desperados and sees the return of the young orphan P K Pinkerton. It's 1862, PK is twelve and is now running a detective agency in Virginia City. PK's first case is to solve the biggest mystery in town – who strangled Short Sally? PK is hired by Sally's maid, an ex-slave girl of a similar age to PK, who witnessed her mistress's murder and is in fear of her own life. So much so that she disappears almost straight away. The description of the murderer is that he is tall, blond and has a “billy-goat” beard. As the investigation progresses PK finds that there are many such men matching that description!

The reader gets to know more of PK's little foibles and eccentricities and way of coping with the world such as tricks to remember people's names. PK's “thorn” is an inability to read people but several friends of PK offer words of advice and tips. PK still remains somewhat mysterious though and has a “secret”...

The Case of the Good-Looking Corpse is a fabulous entry in the series, possibly even better than the first. I was completely immersed. I loved the setting, the snippets of American history, the inclusion of real characters like “Mark Twain” and there's plenty of action and lots of close calls for PK. The case is solved in a very Sherlock Holmes tradition and though I had my suspicions as to the guilty party I hadn't spotted all the clues. PK returns in the intriguingly titled The Case of the Pistol-Packing Widows (out now).
Posted by Karen (Euro Crime) at 09:30