I recently posted my review of ORION LOST my library's Facebook page: 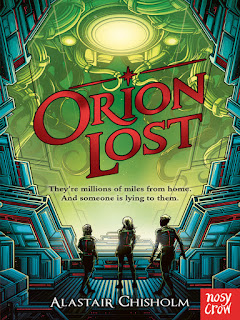 ORION LOST by Alastair Chisholm is set on Orion, a colony spaceship leaving Earth and heading for the planet Eos Five, far far away. The story is told from the point of view of Beth who is thirteen. Her mum is an officer aboard the ship and her dad is also employed on the ship, as a farmer. Beth is training to be an officer herself and soon makes friends with her classmates with the exception of Vihaan, the arrogant son of Orion’s Captain, and his bullying friend Arnold.

For the ship to travel the necessary vast distances, every so often it must “Jump”. The Jump requires that everybody’s memories are backed up just prior to them going to “Sleep” and when they “Wake” the memories are restored.

All is going well aboard the ship, Beth is learning and they’ve made several successful Jumps. But then an unexplained shudder through the ship means everyone is put into emergency Sleep.

When Beth is next awake, it is to find that only her and her classmates can be awoken. The ship is way off the flight-plan, there is massive damage and fires are raging. This small crew has to learn to work together to save themselves, their families and the ship itself. They have to face numerous challenges, ranging from space pirates and mysterious aliens, to the ship’s Artificial Intelligence which might be hiding something, as well as their own fears.

ORION LOST is an absorbing read. It is a mystery, a thriller and a science fiction book all in one. There are lots of twists and turns and surprises and Beth is a character you can root for and empathise with. It appears to be a non-series book though I really would love a sequel.
Posted by Karen (Euro Crime) at 09:30 No comments:

I recently posted my review of AGENT ZAIBA INVESTIGATES: THE MISSING DIAMONDS on my library's Facebook page: 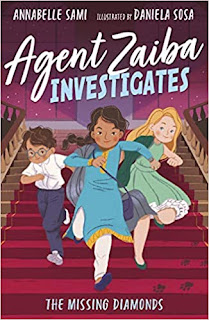 AGENT ZAIBA INVESTIGATES: THE MISSING DIAMONDS, by Annabelle Sami and illustrated by Daniela Sosa, is the first book in a new series and introduces Zaiba, an aspiring detective, and her two sidekicks: her best friend Poppy and younger (half) brother Ali.

The story all takes place in the Royal Star Hotel where Zaiba’s cousin Sam and fiancé Tanvir are having their Mehndi party.

Zaiba, in the best tradition of her hero Eden Lockett - a successful writer of detective stories based on events in her own life – is tasked with identifying the mysterious celebrity who is staying at the hotel. The female celebrity is staying with a small dog who has an expensively bejewelled collar. When first the dog goes missing and then the collar, it is up to Zaiba and her team to find both, solve the mystery and save the day!

I really enjoyed this book. There’s lots of action and use of initiative. All the characters have their individual strengths though Zaiba is on a bit of a learning curve to take notice of her friends’ suggestions at times. Alongside the text there are full-page and incidental illustrations dotted throughout.

Zaiba gets on well with her step-mum Jessica whom she calls mum but there is a mystery about the loss of her birth mum which I hope is revealed over the series. Zaiba feels close to her mum via the Eden Lockett books which she inherited as her mum had written little notes in the margins.

The second book is out in July and I look forward to it.
Posted by Karen (Euro Crime) at 10:00 No comments: