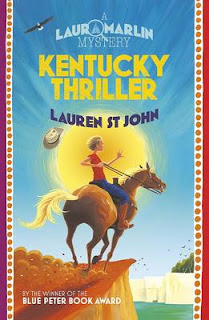 Eleven-year-old Laura Marlin is back in her third adventure Kentucky Thriller which not surprisingly is set mainly in Kentucky. Laura, her best friend Tariq and her guardian Uncle Calvin are setting off on a picnic not far from their St Ives (Cornwall) home when they nearly collide with a horse box abandoned after a crash. They are shocked to discover that there is a horse inside - thankfully unhurt - and the situation seems very fishy. There is a delay but eventually they find that the horse is a valuable thoroughbred stolen from the US and the owner is so overjoyed that he offers them a two-week holiday with his family at their horse farm as they prepare for the huge race that is the Kentucky Derby.

Laura has to leave her beloved dog Skye and uncle behind but is accompanied by Tariq. No sooner have they arrived then strange things happen. Both the children have life-threatening experiences at the hands (feet?) of horses. It seems someone doesn't want then around but who and why? After a rocky start they make friends with their hosts' grand-daughter (whom I hope will reappear in a later book) and set to work to solve the many mysteries surrounding them.

Kentucky Thriller is my favourite so far of the series I think. Though it has an exotic setting the crime is a classic one involving betrayal, skullduggery and greed. I love that Laura is an environmentalist and a vegetarian - though the author does not labour the points - and that the series covers important themes in an accessible way. Tariq has a much welcomed larger role than in the previous two books. The fourth book, Rendezvous in Russia is published 1 August 2013.

Read my reviews of the previous two books here.
Posted by Karen (Euro Crime) at 09:30