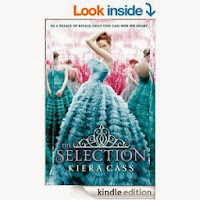 Kiera Cass's The Selection is currently* free on UK Kindle and Kobo.

It’s the chance of a lifetime and 17-year-old America Singer should feel lucky. She has been chosen for The Selection, a reality TV lottery in which the special few compete for gorgeous Prince Maxon’s love.

Swept up in a world of elaborate gowns, glittering jewels and decadent feasts, America is living a new and glamorous life. And the prince takes a special interest in her, much to the outrage of the others.

Rivalry within The Selection is fierce and not all of the girls are prepared to play by the rules. But what they don’t know is that America has a secret – one which could throw the whole competition… and change her life forever.

T S Eliot's "The Love Song of J. Alfred Prufrock", commonly known as "Prufrock" has popped up twice in my reading recently. I hadn't come across it before, having studied no poetry except for Chaucer at school - that I can remember at least.

The first time I noticed it, I didn't realise it was "famous" - and it was on the cover of Ally Condie's Atlantia: 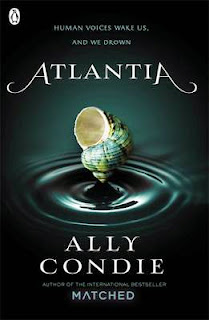 Human Voices Wake Us,
And We Drown

however I'm currently about halfway through The Fault in Our Stars by John Green and lead female character Hazel has been  quoting the whole poem and when she used the lines mentioned above I got googling.

So I've learnt something. Plus I knew Val McDermid had borrowed the title The Mermaids Singing from Eliot but I hadn't realised it was this poem.

The Age of Miracles (Redux)

Karen Thompson Walker's fabulous The Age of Miracles has just been re-released as a Young Adult Edition by Simon & Schuster: 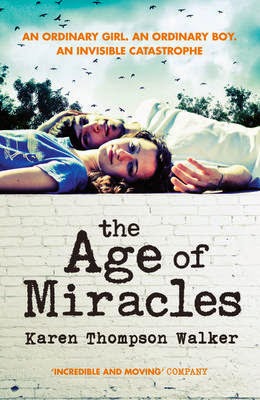 I first read The Age of Miracles when it came out in 2012 and I loved it. It still haunts me and I really look forward to Ms Walker's next book.

The accompanying paperwork to my copy suggests 14+ as a guideline - though the protagonist Julia is around eleven. In my review I felt that the book would appeal to older readers ie adults more than teenagers, so I'm eager to have feedback from younger readers.

I shall be popping a copy on my upcoming 'Crossover Fiction' display at work (library).

My original review is here.

My favourite read of 2014, across all the genres I read - crime, SF and YA - and the only one to get a 5 star rating on Good Reads was

I absolutely adored this book and yet it took the film coming out to nudge me to read it. I watched the DVD and didn't want it to end. I immediately read the Free Four knife-throwing scene then hunted out my copy of Divergent the book. Though there are some differences I think the film captured the book very well and the casting was good (more on this in a moment). Of course once I'd finished Divergent I had to immediately read Insurgent and similarly then Allegiant and finally Four.

Tris alone narrates the first two books however Allegiant is split between Tris and Four and unfortunately this didn't work for me at all. The voices were similar and Four becomes a weaker character and this is where Theo James as Four will have a lot of work to do to carry it off. In the Divergent film he (is and) seems older and wiser than Tris and yet the roles become reversed in Allegiant.

For me the series went from 5 (Divergent)  to 4 (Insurgent) to 3 (Allegiant) stars - nonetheless I'm glad to have read it and wonder what Ms Roth will write next.
Posted by Karen (Euro Crime) at 14:44 1 comment: