Review: Dead to You by Lisa McMann 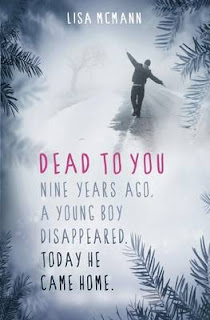 Lisa McMann, author of the Wake trilogy and The Missing (apa Cryer's Cross) turns away from supernatural/paranormal elements to give us this heartbreaking psychological thriller.

Ethan De Wilde, was abducted outside his home when he was seven. Nine years later, Ethan is restored to his original family. He spent years with a woman called Ellen before she placed him in a care home from which he escaped. After spending a year on the streets and a lot of time on the library's computer he found himself - listed on the National Centre for Missing and Exploited Children's website.

The family unit is now complete. He is welcomed by his mum and dad and new young sister Gracie but his now thirteen-year-old brother Blake has his reservations. Why can't Ethan remember anything about the first seven years of his life?

Dead to You, charts the integration of Ethan back into family life and all the stresses and strains of being found, especially with his memory loss. The main positive thing in his life is his developing relationship with neighbour Cami with whom he wants to be more than just friends.

As tensions mount within the family, you turn the pages faster and faster to see how the story will end and my, does it ends on a bang.

Lisa McMann's books always leave me wanting more. They are quick page-turning reads and in Dead to You you really feel for Ethan and his situation. He was very honest with himself and a believable character. His little sister is adorable. I would love it if this turned out not to be the standalone it was intended to be, as you really want to find out what happens next to Ethan and the family.

Dead to You throws up a lot of questions about the nature of family and the bonds within it and I can see it being a great book for discussion at a reading group.

A cautionary note - there are multiple uses of the f-word and some mild sexual content so probably one for older teens.
Posted by Karen (Euro Crime) at 08:47