I recently posted my review of THE LAST CHANCE HOTEL by Nicki Thornton on my library's Facebook page: 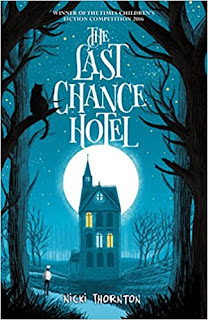 THE LAST CHANCE HOTEL is the first book in the Seth Seppi series. We meet Seth, who is to all intents and purposes an orphan, working as a kitchen boy/general dogsbody to the Bunn family who run the Hotel. He is bullied mercilessly by their awful daughter Tiffany who is supposedly training to be a chef.

There is a grand event being held at the Hotel and Tiffany tricks Seth into making a dessert which is unsuitable for the main guest so Seth quickly rustles up an alternative and labels it for the main guest’s consumption only.

So when the main guest dies of apparent poisoning after sampling their special dessert, Seth is immediately the main and only suspect.

It is then Seth discovers that his cat, Nightshade, can talk and that magic is real. The main thing going for him is that the main detective doesn’t seem to think that Seth did it. Can Seth clear his name? And what else doesn’t he know about his home and its residents?

With its short chapters this is a quick read, and combines a locked-room-style mystery with Harry Potter-style magic. As well as a death there are a few punch-up scenes during the thrilling finale which might steer this to a slightly older children’s audience eg 9+ years.

THE LAST CHANCE HOTEL won the Times/Chicken House Children’s Fiction Competition in 2016.
Posted by Karen (Euro Crime) at 12:00 No comments: