Another new series which has come to my attention (but is not yet in the library) is Kate Pankhurst's Mariella Mystery series. Book one, The Ghostly Guinea Pig and book two, A Cupcake Conundrum, were published in April 2013. A third book, The Huge Hair Scare, is due out in October. As with the Maisie Hitchins series the target audience is the seven to nine (ish)-year-olds but these appear to be told in a diary style with illustrations. 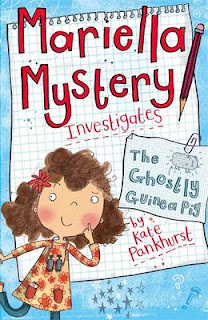 Mariella Mystery (That's me!) - totally amazing girl detective, aged 9 and a bit. Able to solve the most mysterious mysteries and perplexing problems, even before breakfast.

When their teacher Miss Crumble spots the ghost of her pet guinea pig, Mr Darcy, in her back garden, she doesn't know what to think. But Mariella knows it's up to her and her fellow Mystery Girls to get to the bottom of The Case of the Ghostly Guinea Pig. 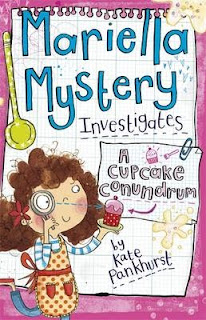 Someone is trying to sabotage the Great Puddleford Bake-Off, 'Bake or Break'. It's up to Mariella and her Mystery Girls to work out who, to save the Victoria sponges and pavlovas and prevent the entire contest from turning into a veritable Cupcake Catastrophe and Kitchen Nightmare.
Posted by Karen (Euro Crime) at 10:00