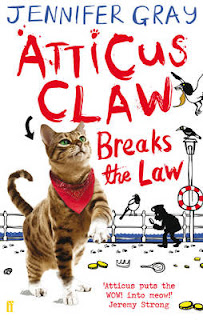 Atticus is brought back to England, from Monte Carlo, by a missive from an unknown party. When he arrives, he finds his employer is a trio of magpies lead by Jimmy, who want to get their revenge on humans after the death of some of their fellows at the hands of cars. Jimmy wants Atticus to rob houses in Littleton-on-Sea. In addition the birds have a secret plan to steal a priceless tiara at the upcoming, televised antiques fair. Atticus agrees, in return for sardines.

An unexpected change in Atticus's life begins when he is 'rescued' by two children who happen to be the offspring of Inspector Cheddar and Mrs Cheddar. The former has to solve the robberies and the latter is organising the antiques fair. Atticus begins to find that he likes his new home and then the love of a good woman cat leads him to reconsider his career...

Though Atticus Claw Breaks the Law is ostensibly for eight to ten year olds, it is a humorous and charming read for cat owners of all ages as they will recognise the cat's behaviour and thought patterns. It is also a gentle, proper, crime novel, with crimes and villains and a cunning plan to capture them. The second book, Atticus Claw Settles a Score, is already available and the third, Atticus Claw Lends a Paw, is out in August 2013. I'll be seeking them both out.
Posted by Karen (Euro Crime) at 09:30