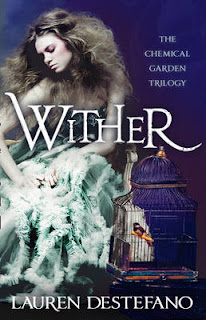 Review: Wither is the first part in The Chemical Garden trilogy, the sequel Fever is also available. At an unspecified time in the future, technology has allowed for perfect children to be born. These "first generations" are living to a ripe old age however subsequent generations are reduced to a lifespan of 20 years for females, 25 for males at which time a virus kills them. In addition, all that remains of the habitable world is North America with the other continents reduced to nothing, uninhabitable fragments.

Young women are at risk from the 'Gatherers' who steal them off the street and sell them as brides into polygamous marriages to make babies. This is what happens to sixteen-year-old Rhine, who lived in New York City with her twin brother Rowan, before being sold to a wealthy Floridian architect Linden (21) along with two sister brides, Jenna (18) and Cecily (13). The brides live in a large house in luxury but it is still a prison and Rhine vows to escape and return to her brother. As well as her sister-wives she begins to become friends with one of the servants, Gabriel, however she has to be careful as Linden's father the heartless Vaughn knows everything that goes on and will go to inhuman lengths to keep Linden happy.

Wither is an imaginative debut novel which suffers a little from repetition and slow pacing. Rhine has to play the long game, getting her husband to trust her enough for her to leave the mansion, albeit escorted, however she spends the best part of a year in the mansion, 25% of her remaining life-span. Rhine begins to tolerate Linden as he is a pawn like her in his father's machinations, but unlike Rhine he is weak and I wanted Rhine to tell him the truth and get him to change things. Love interest Gabriel is kept off-stage for much of the time. Nonetheless, with its well-developed characters, it held my interest and there were some unexpected twists in the plot.

I enjoyed Wither but I'm hopeful that Fever will have more thrills, more romance, more about the outside world and more about the virus and the possibility of an antidote.
Posted by Karen (Euro Crime) at 19:28