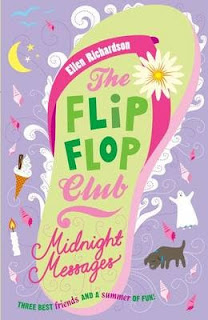 Review: Midnight Messages is the third adventure for the trio, Elly, Tash and Sierra who are all currently based on Sunday Island during an idyllic summer. Elly is living with her aunt, following the death of her mother; Tash is a native, and Sierra is there whilst her father is writing about the history of the island.

The book begins with a sleepover in Tash's treehouse where she has brought some of the inventions of her late grandfather. One of which is a ghost detector...which happens to go off! A haunted treehouse and what are those lights flashing down in the graveyard? The girls creep down and though the lights disappear they hear otherworldly scratchings.

Adding to the spooky goings on is Elly's aunt's guest Celeste, a medium who insists they have a séance and Tash hears noises in her home's library. What is the source of all this ghostly activity?

The girls have to overcome many of their fears to investigate, including going into a tomb and scrabbling through claustrophobic tunnels and protecting the treehouse from an intruder.

Midnight Messages fits nicely into both summer reading and the 2013 theme for the Summer Reading Challenge which is Creepy House. Aimed at (around) nine year olds this series harks back to the adventures written by Enid Blyton where the children stay out all night and roam the island with no parental supervision and in this episode outwit the 'villain' by themselves - with help from Tash's dog Mojo. It's a bit scary in parts and a serious note is added briefly when Elly is unsettled by the thought of the séance as it's not such a game to her given her personal circumstances.

At 191 pages, Midnight Messages is slightly longer than the two previous entries, Charmed Summer and Whale Song. It also contains the first chapter of book four, Star Struck (out now), and some puzzles and a very yummy sounding recipe for French Toast!
Posted by Karen (Euro Crime) at 09:00