Review: Enola Homes: The Case of the Missing Marquess by Nancy Springer

I recently posted my review of ENOLA HOLMES: THE CASE OF THE MISSING MARQUESS by Nancy Springer on my library's Facebook page. 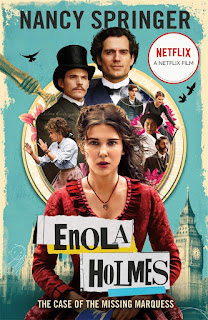 ENOLA HOLMES: THE CASE OF THE MISSING MARQUESS by Nancy Springer is the first in a six-book series featuring the hitherto unknown younger sister of famous Victorian detective Sherlock Holmes. First published in the United States in 2006, the recent Netflix film has led to the series being published in paperback in the UK. [NB. The final two books in the series are available as audiobooks via Overdrive/Libby and as CD copies in the library].
Enola and her mother having been living in the country with little to no contact with Enola’s elder brothers Mycroft and Sherlock. Enola is very bright but has not had a conventional education. On Enola’s fourteenth birthday, her mother disappears, without it seems, a trace. Enter the brothers. Shocked by the state of the house and Enola, Mycroft arranges for Enola to attend boarding school.
Enola thinks otherwise and sets off to find her mother, using some clues that her mother left behind for her…alone.
Enola’s journey to London overlaps with a missing person’s case, which she cannot ignore and so lands herself in a lot of danger however she is intelligent enough to save the day.
This is a short book and the first half is Enola escaping her brother’s intentions, and the second half is her escapades in London. It very much sets up the series with Enola becoming not a detective like her brother but a finder of lost things. And there is the ongoing mystery of her mother’s whereabouts.
This is an enjoyable mystery set in the Victorian Era with a humorous, resourceful and quick-witted heroine. Due to some briefly referenced adult themes, it is more of a teenage book than junior fiction.
Also available in the teenage section, is the ‘Young Sherlock’ series by Andrew Lane.
Posted by Karen (Euro Crime) at 09:30 No comments:

I recently posted my review of THE HIGHLAND FALCON THIEF by M.G. Leonard & Sam Sedgman, illustrated by Elisa Paganelli, on my library's Facebook page. 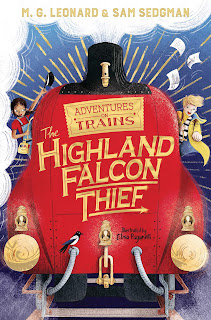 THE HIGHLAND FALCON THIEF by M.G. Leonard and Sam Sedgman, illustrated by Elisa Paganelli, is the first in the “Adventures on Trains” series which will number four entries by the end of 2021 and is aimed at readers aged nine-years-old or older.
The Highland Falcon is the name of a steam engine which, on its final commemorative voyage, is doing a lap of the UK, from London and back, with a stop off at Balmoral in Scotland to pick up the (unnamed) prince and princess who will wave from the train as it passes slowly through stations and show off the magnificent Atlas Diamond necklace.
Our hero is eleven-year-old Hal who is, at first reluctantly, joining his travel writer Uncle Nat on this Royal Train. Hal thinks he’s the only child on the train and is disappointed to not be able to play his electronic games. He is a talented artist, however, and settles for sketching. When Hal spots a girl hiding in the out of bounds part of the train, he tracks her down and together they decide to track down the jewel thief who has struck at least once already, and with the priceless Royal jewel coming aboard they know what the thief’s next target will be.
Things of course do not go to plan, and Hal has to be very brave to save the day and later reveal the culprit in a classic “get all the suspects together in the dining room” denouement.
From its striking foiled cover to the high-quality drawings inside, this is a very attractive book and it is complemented by an exciting and informative story. Readers will pick up some history of the railway whilst trying to solve the puzzle of who is stealing and where are the stolen goods being hidden? The solution to the latter should appeal to the target audience!
THE HIGHLAND FALCON THIEF has unsurprisingly won several awards including the ‘2020 Books Are My Bag readers awards’ for Children’s Fiction.