The shortlisted authors for the 2012 Queen of Teen (including one man!) have been announced:


Queen of Teen is royally delighted to announce the shortlist for the fiction world’s most glamorous award. Thousands of heartfelt nominations have been received from teenagers across the country and voting is now open to find this year’s Queen of Teen.

The award will be presented at a glittering award ceremony in July 2012, when the writers of the best nominations will be invited to mingle with their favourite authors, invited journalists and other special guests. The ceremony is to be held at Queen of Teen HQ in leafy Surrey and will be superbly pink and sparkly – a truly majestic celebration of this thriving and important genre!

Teens and tweens can now vote for their favourite author from the shortlist by visiting www.queenofteen.co.uk. Queen of Teen has attracted tens of thousands of votes from young readers across the globe and last year resulted in the fabulous author of the Chocolate Box Girls books, Cathy Cassidy, being crowned Queen of Teen. On being crowned Cathy said: “I've had lots of fun since being voted Queen of Teen... it's an amazing award because it's all about YOU, the super-cool reader gals out there. Your votes and views really DO count!”

Vote before 25 June to have your say at the Queen of Teen website. Queen of Teen is also on Facebook and Twitter: @QueenofTeenUK #QOT2012.
Posted by Karen (Euro Crime) at 14:15 No comments: 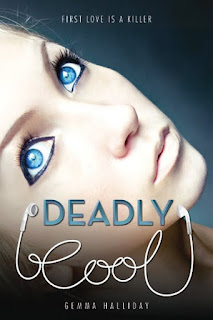 Review: Deadly Cool is the first of the Hartley Featherstone mysteries. Hartley is sixteen and has just discovered that her boyfriend Josh has been cheating on her with no less than the chastity queen (“earn your right to wear white”) Courtney. Going after school to confront him, Hartley and her best friend Sam break into his bedroom and discover Courtney's strangled body. The now on the run Josh asks for Hartley's help in finding the real killer.

As well as Sam, Hartley has help from “bad boy” Chase, the editor of the school newspaper who is after a scoop.

Hartley's investigation takes place under the sympathetic and increasingly mistrustful gazes of her school peers as dead bodies seem to be following her around with another student killed on school premises.

Can Hartley find the real killer, clear her now ex-boyfriend's name and keep her grades up?

Deadly Cool is an enjoyable read and surprisingly funny for a murder mystery. (There is a hilarious scene where Hartley is hiding under Chase's bed and he starts to undress...). Hartley is a smart, likeable, resourceful character whom I'm looking forward to meeting again in Social Suicide (out soon). The mystery isn't one you can solve before Hartley as the solution relies on a brainwave from Hartley and hard graft by Chase. Hartley does commit the cardinal sin of crime novels though – going out at midnight without telling anyone...

As Hartley is getting over a break-up and betrayal in Deadly Cool, there isn't much romance – though there is plenty of witty banter - but I can see that changing in short order.

If you've enjoyed Star Crossed: Aries Rising by Bonnie Hearn Hill then you should like this.

Here are some of the teenage/YA titles that are being published in the UK in April 2012. I will put a link to this post and previous and subsequent "monthly" lists in my sidebar. January's list is here, February's is here and March's is here.