I couldn't resist including Foxy in the picture, he looks somewhat bemused! 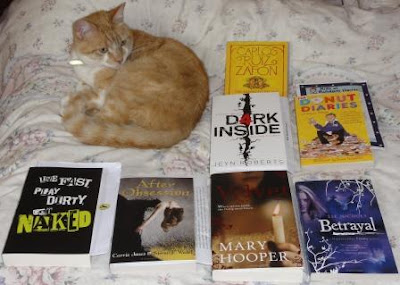 The Midnight Palace by Carlow Ruiz Zafon (audio book)
The book begins with a chase through the streets of Calcutta in May 1916. Lieutenant Peake pauses for breath outside the ruins of the Jheeter's Gate station knowing that he only has a few hours to live. Inside his overcoat he is sheltering two newborn babies - twins, a boy and a girl. Pursued by his would-be assassins, Peake runs at full tilt to the house of Aryami Bose, to whom he entrusts the children. In 1932 we meet the boy, Ben, and his group of friends the night before they are due to leave St Patricks orphanage. They have formed a secret club, The Chowbar Society, that meets each week at midnight in the old ruin they have christened The Midnight Palace. Their final meeting is due that evening but then Aryami Bose turns up at the orphanage with Sheere, Ben's sister, and tells them the story of the parents they never knew. Their father was an engineer and writer who died in tragic circumstances at the inauguration of Jheeter's Gate station. But as the novel unfolds, there is more to this story than meets the eye and they are lured by a shadowy figure from the past into a final showdown in the ruins.

It was the summer of so many things. Heat and violence, love and hate, heaven and hell. It was the time I met William Bonney - the boy from Belfast known as Billy the Kid.

I've kept William's secrets for a long time, but now things have changed and I have to tell the truth. But I can't begin until I've told you about Curtis Ray. Hip, cool, rebellious Curtis Ray. Without Curtis, there wouldn't be a story to tell.

It's the story of our band, of life and death . . . and everything in between.

This characteristically gripping novel from award-winning author Kevin Brooks will rock you to the core.

Velvet by Mary Hooper (5 Sep, Bloomsbury)
Velvet is a laundress in a Victorian steam laundry. With both her mother and father dead, she is an orphan and has to rely upon her own wits to make a living. The laundry is scalding, back-breaking work and Velvet is desperate to create a better life for herself. Then Velvet is noticed by Madame Savoya, a famed medium, who asks Velvet to come to work for her. Velvet is dazzled at first by the young yet beautifully dressed and bejewelled Madame. But soon Velvet realises that Madame Savoya is not all that she says she is, and Velvet's very life is in danger ...A romantic and thrillingly exciting new novel from an acclaimed and much loved historical writer for teens

Betrayal by Lee Nichols (5 Sep, Bloomsbury) (sequel to Deception)
Emma Vaile is the most powerful ghostkeeper in centuries. Which is great when she's battling the wraith-master Neos, but terrible when she's flirting with fellow ghostkeeper (and love interest) Bennett. When ghostkeepers fall in love, the weaker one loses all power, and that's something Bennett is not willing to accept. Heartbroken and alone, Emma tries to lose herself in school. A new team of ghostkeepers has arrived - one a snarky teen boy, the other a visiting scholar - and Emma finds solace in training for the battle against Neos. But as the team grows stronger, they are threatened by an unknown force. As chilling and page-turning as Deception, this sequel will grab readers and hold them to the last page. No one is safe from suspicion as Emma closes in on the traitor.


After Obsession by Carrie Jones & Steven E Wedel (5 Sep, Bloomsbury) (I've enjoyed the first two "Need" books by Carrie Jones)
Aimee and Alan have unusual pasts and secrets they prefer to keep hidden. Aimee's deceased mother struggled with mental illness and hallucinations, and Aimee thinks it could be hereditary. After all, she sees a shadowy river man where there isn't one. And then there was that time she and her best friend Courtney tried to conjure a spirit with a Ouija board ...Alan is Courtney's cousin. His family moved to Maine when Courtney's father went missing. It's not just Alan's dark good looks that make him attractive. He is also totally in touch with a kind of spiritual mysticism from his Native American heritage. And it's not long before Aimee has broken up with her boyfriend ...But it's not Aimee or Alan who is truly haunted - it's Courtney. In a desperate plea to find her father, Courtney invites a demonic presence into her life. Together, Aimee and Alan must exorcise the ghost, before it devours Courtney - and everything around her.

Moments after several huge earthquakes shake every continent on Earth, something strange starts happening to some people. Michael can only watch in horror as an incidence of road rage so extreme it ends in two deaths unfolds before his eyes; Clementine finds herself being hunted through the small town she has lived in all her life, by people she has known all her life; and Mason is attacked with a baseball bat by a random stranger. An inner rage has been released and some people cannot fight it. For those who can, life becomes an ongoing battle to survive - at any cost!

Since mankind began, civilizations have always fallen - now it's our turn!

The Donut Diaries of Dermot Milligan by Anthony McGowan, illustrated by David Tazzyman
A British Diary of a Wimpy Kid, featuring Dermot, an overweight eleven-year-old. Hilariously funny and insightful.

Dermot Milligan’s got problems. He’s overweight and hooked on donuts. He has a pushy, over-achieving mother, and a father who spends all his time hiding in the loo. His sisters, Ruby and Ella (known as Rubella) attack him relentlessly from the opposite directions of Chav and Goth. And now, he's being sent to a nutritionist, Doctor Morlock, who looks like a Dementor from Harry Potter and the Deathly Hallows.

This diary is Doc Morlock's idea. Not only does Dermot have to write down how many donuts he eats, but also - and this is the really rubbish part - he has to talk about HIS FEELINGS! But things are about to get even worse - he's being separated from his friends and sent to St Michael’s, a posh school where he just knows he's going to stick out like a sore thumb. A sore thumb with a weight problem . . .

Dark Angel by Eden Maguire (Again I've read and enjoyed the first two in her other series, The Beautiful Dead)
Tania's heart belongs to Orlando. Nothing can rip them apart.

Until the seduction begins in a flurry of glamour and magic, music and parties all orchestrated by the mysterious and mesmerising Zoran, an iconic rock star who has retired to a remote ranch in the nearby mountains.

And there Tania meets the dark side.

Can she resist temptation?