I think most people stopping by will have heard of these books :). 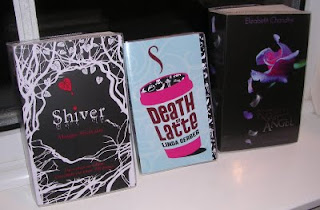 Kissed by an Angel - Elizabeth Chandler
Ivy and Tristan are meant to be together. Both stunningly attractive, brilliantly talented and very much in love, they think their happiness will last forever. When a terrible car accident shatters their world, killing Tristan and injuring Ivy, she must face life alone - or so she thinks. However, Tristan is watching over her as her guardian angel - so close she can feel his touch and hear his voice. And no one needs a guardian angel more than Ivy, because someone is trying to kill her. But if Tristan saves Ivy, his mission on earth will be finished, and he'll have to leave her behind. Will saving Ivy mean losing her forever?

Death by Latte - Linda Gerber
It was only a few weeks ago that Aphra Connolly’s life changed completely. She had been living a quiet existence on her father’s secluded island resort, until Seth Mulo turned up and stole her heart . . . and provided information that led her to find her mom in Seattle. But the reunion isn’t quite what she expected. Aphra’s mom, Natalie, doesn’t seem happy to see Aphra, and Natalie’s boyfriend, Joe, insists that Aphra go home. Even worse, Seth shows up, only to ask her to return the ring he gave her the previous summer. At least Natalie’s hunky neighbor is sympathetic. But when Joe is found dead at a nearby coffee shop, Aphra discovers her whole trip to Seattle has been based on a lie. And now someone just might be trying to kill her. . . .

Shiver - Maggie Stiefvater
For years, Grace has watched the wolves in the woods behind her house. One yellow-eyed wolf--her wolf--is a chilling presence she can't seem to live without. Meanwhile, Sam has lived two lives: In winter, the frozen woods, the protection of the pack, and the silent company of a fearless girl. In summer, a few precious months of being human . . . until the cold makes him shift back again.

Now, Grace meets a yellow-eyed boy whose familiarity takes her breath away. It's her wolf. It has to be. But as winter nears, Sam must fight to stay human--or risk losing himself, and Grace, forever. 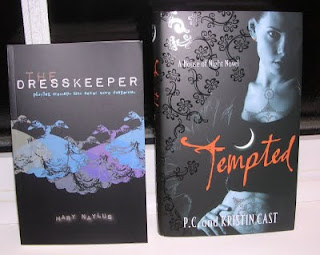 Tempted by PC and Kristin Cast
So…you’d think after banishing an immortal being and a fallen High Priestess, saving Stark’s life, biting Heath, getting a headache from Erik, and almost dying, Zoey Redbird would catch a break. Sadly, a break is not in the House of Night school forecast for the High Priestess in training and her gang. Juggling three guys is anything but a stress reliever, especially when one of them is a sexy Warrior who is so into protecting Zoey that he can sense her emotions. Speaking of stress, the dark force lurking in the tunnels under the Tulsa Depot is spreading, and Zoey is beginning to believe Stevie Rae could be responsible for a lot more than a group of misfit red fledglings. Aphrodite’s visions warn Zoey to stay away from Kalona and his dark allure, but they also show that it is Zoey who has the power to stop the evil immortal. Soon it becomes obvious that Zoey has no choice: if she doesn’t go to Kalona he will exact a fiery vengeance on those closest to her. Will Zoey have the courage to chance losing her life, her heart, and her soul? Find out in the next spectacular installment in the House of Night Series, Tempted.

The Dresskeeper by Mary Naylus
When Picky's Mum forces her to look after Gran, who has dementia, Picky is accidentally transported back to the year 1685, where a man in a wig insists she is someone called Amelia and tries to kill her. Managing to get the dress off just in time, Picky returns to the present with the dress covered in blood. Who is Amelia? Is she dead? Will wearing the other dresses in the chest take Picky back in time too? And does she dare put herself in danger again?

Plus an e-book ARC of Once a Witch by Carolyn MacCullough
Tamsin Greene comes from a long line of witches, and she was supposed to be one of the most Talented among them. But Tamsin's magic never showed up. Now seventeen, Tamsin attends boarding school in Manhattan, far from her family. But when a handsome young professor mistakes her for her very Talented sister, Tamsin agrees to find a lost family heirloom for him. The search - and the stranger - will prove to be more sinister than they first appeared, ultimately sending Tamsin on a treasure hunt through time that will unlock the secret of her true identity, unearth the sins of her family, and unleash a power so vengeful that it could destroy them all. This is a spellbinding display of storytelling that will exhilarate, enthrall, and thoroughly enchant. 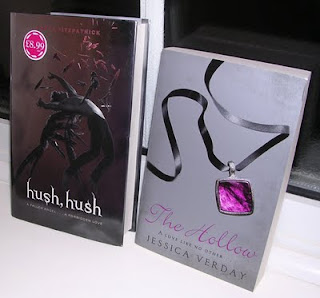 Hush, Hush by Becca Fitzpatrick (thanks to FallenArchangel.com)
A sacred oath, a fallen angel, a forbidden love...This darkly romantic story features our heroine, Nora Grey, a seemingly normal teenage girl with her own shadowy connection to the Nephilim, and super-alluring bad boy, Patch, now her deskmate in biology class. Together they find themselves at the centre of a centuries-old feud between a fallen angel and a Nephilim...Forced to sit next to Patch in science class, Nora attempts to resist his flirting, though gradually falls for him against her better judgment. Meanwhile creepy things are going on with a mysterious stalker following her car, breaking into her house and attacking her best friend, Vi. Nora suspects Patch, but there are other suspects too - not least a new boy who has transferred from a different college after being wrongly accused of murdering his girlfriend. And he seems to have taken a shine to Nora...Love certainly is dangerous...and someone is going to have to make the ultimate sacrifice for it.

The Hollow by Jessica Verday (thanks to My Favourite Books)
Growing up in the town of Sleepy Hollow, the mystery and intrigue over Washington Irving's classic legend are all part of daily life for sixteen-year-old Abbey. But when her best friend, Kristen, vanishes at the bridge near Sleepy Hollow Cemetery, Abbey's world is suddenly turned upside down. While everyone is all too quick to accept that Kristen is dead, Abbey refuses to believe that she is really gone. And when Abbey meets the gorgeous, but mysterious, Caspian at Kristen's memorial she starts to feel like she has something to hold on to for the first time since Kristen's disappearance. But when Abbey finds a diary hidden in Kristen's bedroom, she begins to question everything she thought she knew about her best friend. How could Kristen have kept silent about so much? And could this secret have led to her disappearance or even her death? Hurt and angry at Kristen's betrayal, Abbey turns to Caspian for support...and uncovers a frightening truth about him that threatens both their emerging love and her sanity...
Posted by Karen (Euro Crime) at 08:36