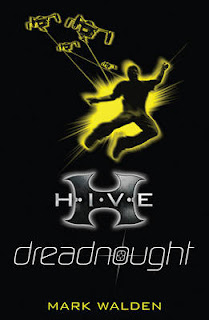 First Lines:
The young girl ran through the knee-deep snow, her breath escaping in ragged gasps, leaving a trail of thin white cloud that hung in the air.

Review: Dreadnought is the fourth in the HIVE (Higher Institute of Villainous Education) series. HIVE is a training ground for the next generation of villains and is hidden in a volcano on a tropical island. New girl Lucy is taken under the wing of our lead characters: Otto, Wing, Laura and Shelby. No sooner has she arrived when they are assigned to a training mission in the Arctic and their overseer is Raven, the world's top assassin.

Enroute to the Arctic however, a detour to the GLOVE (Global League Of Villainous Enterprises) flagship Dreadnought goes wrong and it soon means that the Arctic mission is off the menu; the gang have a far more serious undertaking - to save the world from a mad man.

Dreadnought is a fabulously entertaining story, fast paced, full of tension and lots of action. There's a James Bond feel to it - there are high tech gadgets and weapons and the main villain even has an underground hanger. (One of the HIVE training manuals on "offensive beam weaponry" is called No, I Expect You to Die).

Otto and Wing have a lot of the screen time but the girls aren't forgotten and their special skills are equally essential. It's not often you root for the baddies to win but Otto and co. are much, much better than the alternative.

Dreadnought should be enjoyed by both male and female readers though the cover will probably attract the boys more. The story stands alone perfectly well, but the reader would probably get even more out of it, if they've read the earlier books (which I haven't). I enjoyed Dreadnought very much and the cliff-hanger ending has left me eagerly awaiting the next one.

Cover: The cover is probably aimed at boys and reflects the danger and excitement of the book.

Website: Visit www.hivehub.co.uk - for information about the series and the author plus a grapple training game and evil laugh generator!
Posted by Karen (Euro Crime) at 07:15