Review: When Marnie Was There by Joan G Robinson

I recently posted my review of WHEN MARNIE WAS THERE by Joan G Robinson on my library's Facebook page. 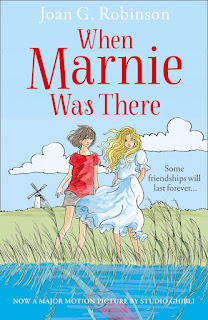 I confess I hadn’t heard of the 1967 classic WHEN MARNIE WAS THERE by Joan G Robinson until the Studio Ghibli film of the same name was released in 2014. Hearing it was based on a book set in Norfolk I decided to seek it out.

The story is told by Anna, whose age is not specified but seems to be around eleven. She is orphaned at a young age and when her grandmother who was caring for her, also dies she is sent to a children’s home. She is later fostered by a London couple. But Anna doesn’t seem to fit in and is lonely and struggling at school and her health is suffering. In desperation her foster mum sends Anna to stay with friends of hers at the North Norfolk coastal village of Little Overton (modelled on the real-life Burnham Overy Staithe). Anna is immediately drawn to the Marsh House at the end of the creek and imagines who might live there.
Anna spends all her time outside, on the beach, paddling in the creeks and one day sees a young girl having her hair brushed in a window of the Marsh House.
One night, Anna finds a small boat tied up near her house and assumes it has been left for her to visit the Marsh House and she finally gets to meet the young girl, Marnie.
Marnie and Anna spend lots of time together though nobody sees them together and Anna is heard talking to herself. Is Marnie real or imagined?
When Marnie must leave, a new and happier chapter begins for Anna.
This is a very interesting and captivating book which was shortlisted for the Carnegie Medal. The book teases the mystery of who is Marnie: is she real, a figment of Anna’s imagination or even a ghost? It quietly covers themes of loss and loneliness and grief and acceptance in a beautifully realised Norfolk setting.
“A remote, quiet world where there were only boats and birds and water, and an enormous sky.”

Labels: childrens fiction, Norfolk, review, When Marnie Was There