I missed last week's library loot post as I was away, so I'm combining it with this week. Covers and blurbs from Waterstone's or FantasticFiction. 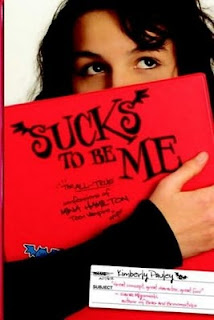 Sucks to be Me by Kimberly Pauley
Mina Hamilton's parents want her dead. (Or undead to be precise.) They're vampires, and like it or not, Mina must decide whether to become a vampire herself. But Mina's more interested in hanging out with best friend Serena and trying to catch the eye of the too-hot-for-high-school Nathan Able than in the vampire training classes she's being forced to take. How's a girl supposed to find the perfect prom date and pass third-year French when her mom and dad are breathing down her neck--literally? 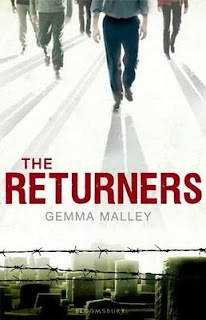 The Returners by Gemma Malley
London teenager Will Hodge is miserable. His mother is dead, his father's political leanings have grown radical, and his friends barely talk to him. To top it off, he's having nightmares about things like concentration camps. Then Will notices he's being followed by a group of people who claim to know him from another time in history. It turns out they are Returners, reincarnated people who carry with them the memory of atrocities they have witnessed in the past. Will realizes that he, too, is a Returner. But something about his memories is different, and with dawning horror, Will suspects that he wasn't just a witness to the events, he was instrumental in making them happen. Set in the near future, with the world on the verge of a new wave of ethnic cleansing, Will must choose to confront the cruelty he's known in his past lives, or be doomed to repeat it . . . again. 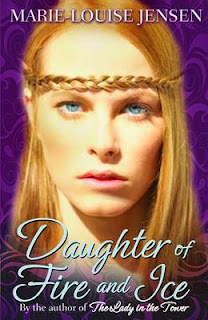 Daughter of Fire and Ice by Marie-Louise Jensen (courtesy of the marvellous Chicklish blog)
Following an attack on her family, fifteen-year-old Thora is enslaved by a brutish Viking chieftain, Bjorn Svanson. A healer and a midwife, Thora is valuable. She also has visions of the future ...and in one she foresees Svanson's death. When her prediction becomes reality, Thora recognizes that another of Svanson's slaves is a man she has seen before-a man from recurrent visions who is destined to be part of her future. Assuming Svanson's identity, the slave and Thora use the dead man's ships to escape. Their destination is Iceland, the then uncharted 'land of fire and ice'. To succeed they must first win over Svanson's crew, and their journey is fraught with hardship and danger. But their troubles are only just beginning. Soon, newcomers are among them and someone is stealing from Thora's medicines to cause terrible harm. Under suspicion herself, can Thora unmask the real culprit and clear her name? And can Thora and the man now known as Bjorn ever really hope that their pasts won't catch up with them? 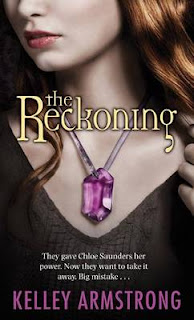 The Reckoning by Kelley Armstrong (pub. 6 April UK)
The nail-biting climax to Kelley Armstrong's bestselling Darkest Powers trilogy Chloe Saunders is fifteen and would love to be normal. Unfortunately, Chloe happens to be a genetically engineered necromancer who can raise the dead without even trying. She and her equally gifted (or should that be 'cursed'?) friends are now running for their lives from the evil corporation that created them. As if that's not enough, Chloe is struggling with her feelings for Simon, a sweet-tempered sorcerer, and his brother Derek, a not so sweet-tempered werewolf. And she has a horrible feeling she's leaning towards the werewolf...Definitely not normal.
Posted by Karen (Euro Crime) at 12:57