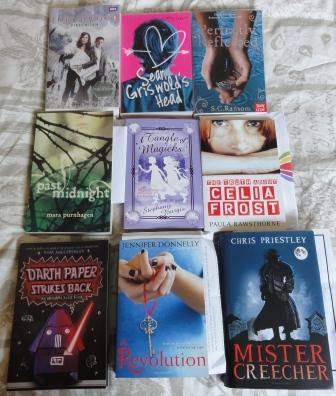 Past Midnight by Mara Purnhagen
Let me set the record straight. My name is Charlotte Silver and I'm not one of those paranormal-obsessed freaks you see on TV…no, those would be my parents, who have their own ghost-hunting reality show. And while I'm usually roped into the behind-the-scenes work, it turns out that I haven't gone unnoticed. Something happened on my parents' research trip in Charleston—and now I'm being stalked by some truly frightening other beings. Trying to fit into a new school and keeping my parents' creepy occupation a secret from my friends—and potential boyfriends—is hard enough without having angry spirits whispering in my ear. All I ever wanted was to be normal, but with ghosts of my past and present colliding, now I just want to make it out of high school alive….

Darth Paper Strikes Back by Tom Angleberger (out now, Amulet Books)
This is the hilarious, clever and much-anticipated follow-up to the breakout hit, "The Strange Case of Origami Yoda". Tom is an exciting new voice in middle grade fiction. His spot-on portrayals of secondary school and the dynamics that exist between kids are realistic and humorous. He's definitely a rising author to watch. This is the fantastic book for boys and reluctant readers especially. "Publishers Weekly" said Tom's writing included 'spot-on boy banter', "100 Scope Notes" called Yoda 'reluctant reader platinum', and "Fuse Number 8" said, 'It's been a while since I found a book that can truly be called genderless (in that it has wide appeal across the board)'. "Lucasfilm" is enthusiastically back on board with us for the second book. It includes instructions for making your own original origami Darth Vader. Darth Vader is the most popular "Star Wars" character, their 'Mickey Mouse' according to Lucas.

Revolution by Jennifer Donnelly (3 Oct, Bloomsbury)
Andi lives in New York and is dealing with the emotional turmoil of her younger brother's accidental death. Alex lives in Paris and is a companion to the dauphin, the young son of Marie-Antoinette and Louis XVI, during the violent days of the French Revolution. When Andi is sent to Paris to get her out of the trouble she's so easily enveloped by in New York, their two stories collide, and Andi finds a way to reconcile herself not only to her past but also to her future. This is a heart-wrenchingly beautiful, evocative portrait of lives torn apart by grief and mended by love.

Mister Creecher by Chris Priestly (3 Oct, Bloomsbury)
Billy is a street urchin, pickpocket and petty thief. Mister Creecher is a monstrous giant of a man who terrifies all he meets. Their relationship begins as pure convenience. But a bond swiftly develops between these two misfits as their bloody journey takes them ever northwards on the trail of their target ...Victor Frankenstein. Friendship, trust and betrayal combine to form a dangerous liaison in this moving and frightening new book from Chris Priestley.
Posted by Karen (Euro Crime) at 10:37