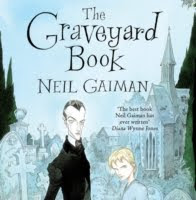 First Line:
There was a hand in the darkness, and it held a knife.

Notes: The Graveyard Book has won several awards including The Newbery Medal 2009 and the Booktrust Teenage Prize 2009. In addition Neil Gaiman was awarded the "Audiobook of the Year" Audie Award for his narration of The Graveyard Book.

Review: The story begins with the "man Jack" entering a house and killing all its occupants except for the toddler whom he misses as the toddler is a curious boy who has wandered off through the open front door and up to the old graveyard on the hill. Fortunately for the boy, the ghosts that live in the graveyard take him in and protect him from the man Jack. Unable to settle on a name, the boy, who is to be looked after by Mr and Mrs Owens, becomes Nobody Owens aka Bod.

Bod grows up in the graveyard with his new family and friends and a mysterious guardian, Silas, who tells him it's not safe for him to leave the graveyard as they cannot protect him in the wide world. The story of Bod growing up is told in a series of episodes which occur every two years until danger reappears in his life and Bod's destiny is revealed.

I absolutely adored The Graveyard Book. I didn't want it to end and saved the last few minutes until I was ready to let it go. It's a charming story, dotted with humour and lovable characters. It's a mix of the fantastical and the mundane. Bod deals with ghosts and ghouls but also with bullies at school. I'm sure I would have had much enjoyment reading the book but I think the pleasure was doubled by having the author read it and read it so well with such a variety of accents; plus you get the pacing and emphasis that the author wanted you to have.

You can listen to an extract on the The Independent's website - in their feature on the 20 best audiobooks.

Cover: The audiobook and paperback editions have the same beautiful cover showing Silas and Bod in the graveyard.
Posted by Karen (Euro Crime) at 12:34