Last week I mentioned that I had the audio version of The Graveyard Book (written and performed by Neil Gaiman) (and I was chuffed that my haul last week got so many lovely comments). So this week I've checked out the print versions - plural - each edition, teenage and adult has a different illustrator (Chris Riddell and Dave McKean respectively) so I can have a look at the illustrations. 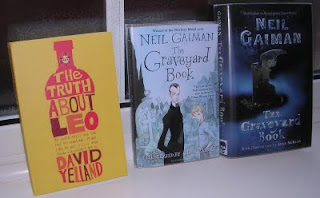 Here's an example of the different styles, taken from the first chapter, drawings of the "man Jack" (click on the photo for a better look): 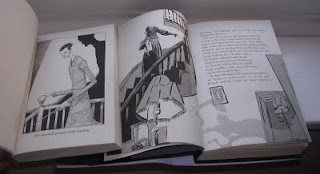 The Truth About Leo - David Yelland (April UK)
No blurb available but, taken from an article in The Guardian: "The Truth About Leo tells the story of 10-year-old Leo, who tries to hide the fact that his father is an alcoholic from the world." 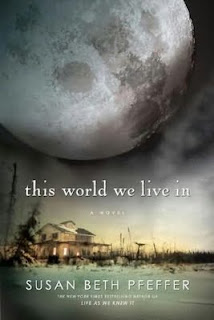 this world we live in - Susan Beth Pfeffer (April US, May UK) obtained from Net Galley

It's been a year since a meteor collided with the moon, catastrophically altering the earth's climate. For Miranda Evans life as she knew it no longer exists. Her friends and neighbors are dead, the landscape is frozen, and food is increasingly scarce.

The struggle to survive intensifies when Miranda's father and stepmother arrive with a baby and three strangers in tow. One of the newcomers is Alex Morales, and as Miranda's complicated feelings for him turn to love, his plans for his future thwart their relationship. Then a devastating tornado hits the town of Howell, and Miranda makes a decision that will change their lives forever.