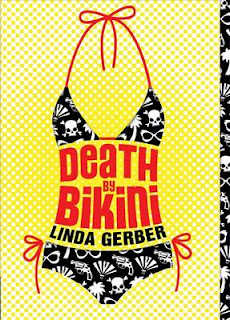 Review: Sixteen-year-old Aphra Benn Connolly lives with her dad on an unnamed tropical island where they run an exclusive get-away retreat. Aphra's life is very different to that of girls her own age with no mall, tv and no real friends. She doesn't get to know guests - as they leave or let you down. Her life is disrupted by the mysterious arrival of a family - two adults and a boy. When the man whispers in Aphra's dad's ear his attitude changes towards them and so does his behaviour with Aphra. He orders her to have nothing to do with them, and then a body is found. Is there a connection between the two events? Aphra refuses to obey her father and her defences are breached by the new arrival, Seth. When a nasty storm cuts off the island, Aphra decides to save not only her family from danger but the mysterious newcomers as well, and a tense cat and mouse game is played out before all is revealed.

This is one of the shorter YA books I've read at just 225 pages and there's plenty of action, perhaps at the expense of character development for anyone but Aphra. Her unusual lifestyle and intriguing family arrangement becomes more explicable through the book and though already a capable individual she becomes more assertive and willing to take chances by the end. Seth is rather adorable and their romance is really sweet. There is one scene where Aphra and Seth have to use near lethal force on an attacker to defend themselves which made me a bit uncomfortable. That aside, Death by Bikini is a clean, exciting mystery and it should have lots of appeal to its target audience. Being a coffee addict I look forward to reading the next in the series, Death by Latte.

Cover: Nice cheerful cover, with a cut out bikini outfit.
Posted by Karen (Euro Crime) at 10:25