Split by Stefan Petrucha will be published in the US in March 2010 (by Walker Books for Young Readers) and in April 2010 in the UK (by Bloomsbury Children's Books). 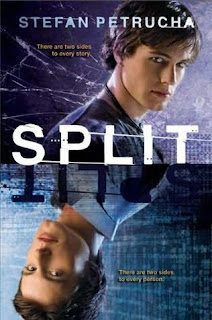 Wade Jackson has always felt split, his love for playing and writing music competing with his ambition to do well in school. But when his mother dies, this need for order competes with his desire to leave it all behind. What follows is a split in his consciousness that takes him to two very different worlds.

Told in alternating chapters that together form one cohesive story, Split follows both Wades as they pursue what they think is the correct path. One Wade continues working hard in school, pulling all-nighters to write a computer code he believes will save the world. The other Wade pursues the dream of being a dive-bar singer, pulling all-nighters to party, gamble, and live on the edge. But when these two worlds begin to collide, each Wade will need to find a balance between control and abandon, order and chaos, life missed and life lost, in order to save himself.

Waiting on Wednesday is hosted by Breaking the Spine.
Posted by Karen (Euro Crime) at 14:36