I have fond memories of reading Willard Price's Adventure series when I was growing up and in particular Diving Adventure in which the two boys (young men?) stay in an underwater city so Kat Fall's Dark Life which is published by Simon & Schuster Children's next April has great appeal: 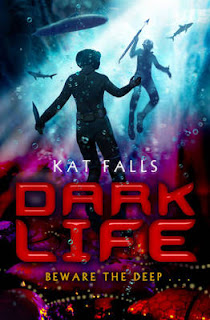 Ty has lived under the ocean for his entire life. Following global warming and the rise of the seas, his family joined an underwater community in hopes of living in the new frontier of the ocean floor. But When Ty meets Gemma, a girl from "topside", who is searching the seas for her brother, she quickly makes his life very complicated. Together Ty and Gemma face dangerous sea creatures and venture into the frontier town's rough underworld as they search for her missing brother. But the deeper they dig, the more attention they attract, and soon Ty and Gemma find themselves being hunted by a gang of outlaws who roam the underwater territories causing havoc, and who seem to have eerie abilities. But Ty has a secret of his own, living underwater for his entire life has meant he has also developed a "special" power. Can he keep it a secret from Gemma and his family or is it time for him to finally tell everyone the truth?

Waiting on Wednesday is hosted by Breaking the Spine.
Posted by Karen (Euro Crime) at 19:58