Not much this week, one library book and one review copy which came with chocolates! You can see the snow on the roof in the background... 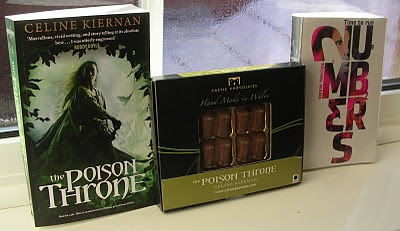 Rachel Ward - Numbers
Since her mother's death, fifteen-year-old Jem has kept a secret. When her eyes meet someone else's, a number pops into her head - the date on which they will die. Knowing that nothing lasts forever, Jem avoids relationships, but when she meets a boy called Spider, and they plan a day out together.
(It appears there's a sequel out in June.)

Celine Kiernan - The Poison Throne (April 2010 (UK))
This is this year's most exciting crossover title. A Friend. A Father. A Kingdom. Which one would you sacrifice? This compelling trilogy of court intrigue, adventure and romance is a winning combination of imagination, powerful storytelling and magnificent characters. Fifteen-year-old Wynter Moorehawke returns home after a five-year sojourn in the bleak Northlands. All has changed in her absence. Wynter is forced to make a terrible choice: stay and bow to the King's will, or abandon her ailing father and join her friend Razi and the mysterious Christopher Garron in their efforts to restore the fragile kingdom to its former stability. But this changed kingdom is a dangerous place, where all resistance is brutally suppressed and the trio constantly risk assassination, torture or imprisonment. Atmospheric and intriguing, it evokes an enchanting and convincing other world - love, treachery, jealousy, tenderness, war, wisdom and court life are all vividly depicted. Set in a fantastical medieval Europe, "The Poison Throne" is a gothic tale of intrigue, adventure and romance which draws the reader in from the very first sentence and doesn't loosen its grip until the last.

(Synopses taken from amazon.co.uk)
Posted by Karen (Euro Crime) at 14:54