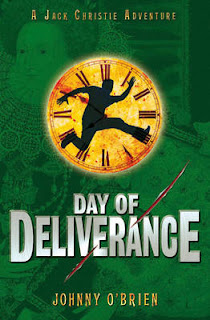 Review: This is the second in the Jack Christie series which currently numbers three and follows on from Day of the Assassins.

At the beginning of the book, there is a brief recap of Jack's adventures so far ie his father has created a time-machine and is a "revisionist", someone who wants to go back in time and change the past to improve the present. Jack and his friend Angus have been recruited by VIGIL who want to prevent any such meddling in time.

In Day of Deliverance, VIGIL has been tipped off by Jack's father that Jack's former history teacher Pendelshape has decided to go back to Elizabethan times and change the course of history, significantly. Jack's dad is now on the run from both sides...

Jack and Angus are sent back to 1587 to find out more and to prevent the Revisionists from succeeding, and along the way they witness the beheading of Mary Queen of Scots, are betrayed by Christopher Marlowe and have lunch with William Shakespeare as well as being captured and recaptured by Spanish and Revisionist factions. Their mission turns out to be not only to save Queen Elizabeth I's life but also to prevent the Spanish Armada from winning the war!

I really enjoyed Day of Deliverance. I have a fondness for this period and I like all the details about daily life, such as drinking ale rather than water as well as the grander back-drop. The story clips along, and includes plenty of action from night-climbing in Cambridge to desperate horse-rides from pursuers. The boys make friends whilst they're there, in the shape of some actors (Players) who provide valuable assistance in sticky situations. We get to know Jack and Angus a bit more; Jack is the brains and Angus the muscle, and they complement each other well. As with the previous book, there is supplementary material in the form of photos of paintings, sketches, maps and some notes on the people and events covered.

As well as entertainment, Day of Deliverance provides a painless and enjoyable history lesson and I look forward to reading the next book, Day of Vengeance.

Though this series may appeal more to boys as the leads are 15 and 17-year-old males, this instalment could be of interest to girls who enjoy the Elizabethan Lady Grace Mysteries (in the second one, Betrayal, Lady Grace also ends up on Francis Drake's ship but not during the Armada!).
Posted by Karen (Euro Crime) at 07:48