Review: Day of the Assassins by Johnny O'Brien 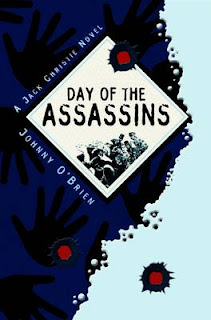 Review: This is the first in the Jack Christie series which currently numbers three.

Fifteen-year-old Jack live with his mum in Scotland and along with his best friend Angus, attends a new, small school. Jack and Angus's favourite computer game is Point of Departure set in World War One. On Jack's birthday, the friends discover a secret room adjacent to the cellar where they spend their game-playing time and in it they find historical artefacts and books and equipment. It was Jack's father's workshop before he mysteriously left the family. Jack hasn't seen his dad for years but receives a birthday present every year.

When Jack and Angus show one of the historical artefacts to their history teacher Mr Pendelshape they could not have expected what would happen next...

The boys are taken to another secret workshop, in the school, where Mr Pendelshape explains why Jack's father is AWOL - because he has perfected a time-travel machine and wants to change the past. When the boys and the teacher are attacked by those who want to prevent any meddling in time, Jack is able to escape via a time-machine into 1914. And so begins a chase across time and Europe. Which side will Jack choose, his father's or his father's enemies?

Jack makes friends along the way as he travels to Sarajevo to prevent or assist in the pivotal moment of history which caused the First World War - the assassination of Archduke Franz Ferdinand.

I did find Day of the Assassins a little slow to get going as it takes about 50 pages (of the 200) for the adventure to begin but once it did and Jack went back in time I was hooked. As well as being exciting and tense, Day of the Assassins offers a historical context to the war and offers the moral dilemma - would you save millions of lives in the past if you could, irrespective of the consequences on the here and now? I particularly liked the inclusion of photographs of some of the key players from the past and a map and time-line of the war. Jack and Angus are likeable characters and I look forward to reading more of their adventures and seeing if Jack ever meets his father.

The book cover will probably appeal to boys more than girls with its bullet holes though I hope girls will pick it up; it's a very easy way to learn new facts. There are some deaths, of people the boys meet, and the vocabulary appeared quite sophisticated (to me), so even though my library shelves this in 9-12s I would pitch it at slightly older readers than that.