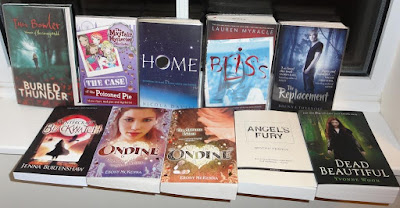 Buried Thunder by Tim Bowler
What secrets lay buried in the heart of the forest? When Maya strays into the forest she also walks straight into a nightmare. It's not just the horrific discovery she makes among the trees, it's what's waiting for her at home. Something too terrifying to believe in. She's not even sure she believes it herself. Perhaps she's going mad - only imagining the sounds in the night and the feeling of being stalked. Maybe she didn't see anything in the forest after all? And there's another question: what was she doing there in the first place . . . alone . . . at dusk? All she knows is that the eyes of a fox drew her there. They will do so again.

The Case of the Poisoned Pie by Alex Carter (I'm looking at this one for reading group ie under 12s)
ONE top music executive * TWO poisoned slices of Mississippi Mud Pie * And FOUR budding detectives...

There’s another mystery to solve at Mayfair Park!

Lauren and her three best friends can’t believe their luck when top boy band, 4ever, arrive at Mayfair Park to shoot their new video.

But the girls soon discover that there is a much darker side to the music biz – and there are some people who will stop at nothing to reach the top . . .

Home by Nicola Davies
Thrilling futuristic science fiction with an environmental slant. It's 2067 and the world has become virtually uninhabitable with all the pollution and toxins created by mankind. Ruling classes live holed up in the cities and workers live in Stations, safe from the outside world. But one day Station 27 is taken over by rebels. Nero, from the ruling classes, and Sacks, a worker, find themselves thrown together as they're captured by the rebels, their common enemy. As they begin to discover the terrifying truth about their world, the two children get separated and find themselves in great danger. Will they find each other before it is too late?

Bliss by Lauren Myracle
Lauren Myracle brings her keen understanding of teen dynamics to a hypnotic horror story of twisted friendship. When Bliss's hippie parents leave the commune and dump her at the home of her aloof grandmother in a posh Atlanta neighborhood, it's like being set down on an alien planet. The only guide naive Bliss has to her new environment is what she's seen on The Andy Griffith Show. But Mayberry is poor preparation for Crestview Academy, an elite school where the tensions of the present and the dark secrets of the past threaten to simmer into violence. Openhearted Bliss desperately wants new friends, making her the perfect prey of a troubled girl whose obsession with a long-ago death puts Bliss, and anyone she's kind to, in mortal danger. Lauren Myracle has taken the ubiquitous friendship novel to a new, dark place.

The Replacement by Brenna Yovanoff
Mackie Doyle is a replacement - a fairy child left in the crib of a human baby sixteen years ago, to replace the baby when it was stolen away by the fey. So though he lives in the small town of Gentry, Mackie's real home is the fey world of tunnels and black, murky water, a world of living dead girls ruled by a little tattooed princess. Now, because his fey blood gives him fatal allergies to iron, blood and consecrated ground, Mackie is slowly dying in the human world. Mackie would give anything just to be normal, to live quietly amongst humans, practice his bass guitar and spend time with his crush, Tate. But when Tate's baby sister goes missing, Mackie is drawn irrevocably back home to the fey underworld of Gentry, known as Mayhem, where he must face down the dark creatures, rescue the child, and find his rightful place - in our world, or theirs.

Wintercraft: Blackwatch by Jenna Burtenshaw (14 April, Headline)
Kate has escaped the clutches of the High Council and Silas has left Albion for the continent. But their lives are forever linked and as the veil weakens, causing Albion's skilled to fear for everyone's safety, Silas and Kate find themselves drawn together by the mysterious and corrupt Dalliah Grey.

Ondine by Ebony McKenna (out now)
This is a brilliantly witty fairy tale with a mystery that is as surreal as it is sinister. One girl. One boy. One spell to be broken. Ondine de Groot is a normal fifteen-year-old who lives with her family in the European country of Brugel. She has a pet ferret called Shambles. But Shambles is no ordinary ferret...He's Hamish McPhee, a boy cursed by a witch. A witch who happens to be related to Ondine. When Shambles turns back into Hamish temporarily, Ondine knows that she has to help him break the spell. He is the most gorgeous boy she has ever met and her one true love! He just can't remain a ferret forever. Can he?


Ondine: The Autumn Palace by Ebony McKenna (out now)
One boy, one girl, one plot to be foiled! Hamish the gorgeous man (and part time ferret) has a new job with the Duke as a spy in his Autumn Palace. So Ondine goes with him. She imagines a hugely romantic escapade together that involves lots of kissing. What she hadn't imagined was having to do endless laundry, go to school and keep Hamish the man a secret. All the while trying to find out who is plotting to kill the Duke. And if that weren't bad enough, it seems that Hamish is more interested in getting the Duke's attention than hers. Plus he's always in ferret form. Things can't go on like this! Can Ondine foil the would-be assassin, save the Duke and get her man back in gorgeous human form? It's going to take a little bit of magic, a lot of stolen kisses and some ferreting around...

Angel's Fury by Bryony Pearce (4 July, Egmont Books Ltd)
Every atrocity. Every war. Every act of vengeance. One fallen angel walks the earth to bring mankind to its destruction...Turning love into hate, forgiveness into blame, hope into despair. Through the fires of hell he will come to haunt one girl's dreams. But what if everything she ever dreamed was true? Every time Cassie Smith tries to sleep, she is plagued by visions of a death: A little girl called Zillah. A victim of the holocaust. In desperation Cassie is sent for treatment in an old manor house. There she meets other children just like her. Including Seth...Seth who looks so familiar. Her dream becomes nightmare. And then reality.

Dead Beautiful by Yvonne Woon (1 May, Usborne Publishing Ltd)
At Gottfried Academy, just one kiss will take your breath away. After Renee discovers her parents dead in what appears to be a strange double murder, she is sent to Gottfried Academy, a remote and mysterious high school dedicated to philosophy, 'crude sciences', and Latin: the Language of the Dead. Here she meets Dante, a dark and elusive student who harbors a deadly secret, but to whom she feels inexplicably drawn. Despite himself, Dante cannot control his attraction to Renee either and their desires gradually deepen into a complex and dangerous romance. But Dante's not the only one with secrets...Gottfried Academy has a few of its own. When Renee begins to investigate the mysterious disappearance of a former student, she begins to realize just how deadly these secrets are...Dark romance meets haunting murder mystery in this captivating tale of love, death and destiny.
Posted by Karen (Euro Crime) at 20:49