To celebrate the eagerly awaited release of Stealing Phoenix, sequel to one of my favourite reads of last year, Finding Sky, author Joss Stirling is on "tour". Today she stops by Teenage Fiction For All Ages and writes about "The Savant Olympics" 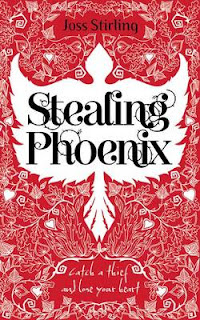 Synopsis
What do you do when your soulmate turns out to be a thief? Steal her, of course. Phoenix was raised within the Community, a gang of thieves with paranormal powers, under the control of a harsh master known as the Seer. The notion that there's a soulmate out there for every person with a paranormal gift is mere myth in Phoenix's world. That is until the Seer gives Phoenix the details of her next target, Yves Benedict. He's more than just her next victim, he is her destiny. To be together, Phoenix must break away from the Community but resistance against the Seer puts them both in mortal danger. Phoenix has never trusted anyone before, now it's time to trust Yves with her life.

The Savant Olympics
As you might know by now, Stealing Phoenix starts off explosively at the new site for the 2012 Olympics. This got me wondering what kind of Olympics the Savants could hold. They would have an unfair advantage over the rest of us – Zed for example would know exactly where you were going to put the ball in any of those disciplines – football, tennis, hockey etc etc. But if they were playing others like them they could expand the Olympic disciplines in weird and wonderful directions.

So let’s imagine my seven Benedicts limbering up at the start of their competition (please I get to design the strip!).

Trace – he is the one who knows where things have been by touch. This would lend itself to a Round the World in Eighty objects race. The contestants would have to follow the path from artifact to artifact, with each clue leading to the next. A marathon for trackers.


Uriel – he sees the past. This is a tricky gift to turn into an Olympic sport as it sounds more useful for Time Team. Perhaps the guys in his discipline could be each given a ruin (Colosseum, Parthenon, etc.) and have to rebuild it (resources unlimited) exactly as it was on the day it was first opened.


Victor – he in many ways has the scariest power of all the brothers as it involves meddling in the minds of others. I suppose he could enter into a competition to run the most perfect opening ceremony. Watching the Beijing one, you had to wonder if there wasn’t some kind of mind control going on! I’ve got a feeling the London one is going to be less smooth…


Will - I have a soft spot for this guy, everyone’s best mate, tuned for danger. I think we could run a great event for him, like a kind of Capture the Flag where the contestants have to evade ‘the enemy’ to gain the prize. Set him down in the wilderness and let him show what he is made of! Bear Grylls, eat your heart out!


Xav – we already know that Xav rocks at downhill slalom so he could enter the real Olympics without cheating. His healing skills would make him a must as your team therapist.


Yves – so much potential here! How about long distance lighting of the Olympic torch? Or blow up the archery butts rather than shoot them? If we are thinking large, how about a strong of mountaintop beacons just like in The Return of the King, but lit by Savants from afar?


Zed – he can do a little bit of everything but I think he would enjoy a really difficult motorcycle course with random accidents waiting to happen. Those with foreknowledge would have to use it to avoid coming to disaster. Mario Carts, move over!

Many thanks to Joss and Oxford University Press.
The next stop on the tour is at Daisy Chain Book Reviews.

The previous stop was at Serendipity Reviews.