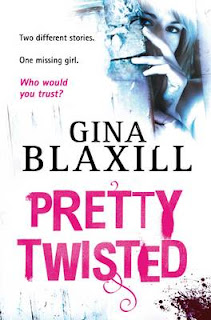 Notes: The following review is written by Milly aged ten and a half, she is the daughter of one of my Euro Crime reviewers, and I'm very pleased that Milly will be writing more reviews for Teenage Fiction For All Ages in the future.

Review: Jonathan’s in love with Freya. So when Freya goes missing at the same time as local girls are found killed, Jonathan fears the worst. He asks for the help of his internet buddy, Ros, in finding Freya. Ros has a secret crush on Jonathan and is happy to help him out.

This book starts with a question: ‘How did we get ourselves into this mess?’ You’re gripped rightaway, wanting to find out what the mess is and how they got into it, and how they’ll get out.

Jonathan and Ros take turns to tell the story. They’re both great, but Ros has an especially good story as there’s lots going on in her life. Like the day she goes with her sister and best friend into a stranger’s house where men try and tempt the girls to stay. It’s really threatening and scary.

Jonathan’s story is pretty scary too. He’s a police suspect in Freya’s disappearance and has to find out what happened to her, to try and clear his name. He’s very frightened for Freya, because of the two murdered girls found floating in the Thames. The image of the dead girls is very vivid and sticks in your mind as you read the book.

As the story is told by two people, both boys and girls can enjoy it. The dialogue between Jonathan and Ros on the internet is particularly good. The book has great descriptions of London and some awesome action sequences, such as the night Jonathan is stuck in London and chased by a biker gang through the neon-lit streets.

Dark, adult themes and some strong language, but all in all it’s an awesome read with cool stuff happening all the way through. A sequel would be really good, especially if there’s more Ros in it.