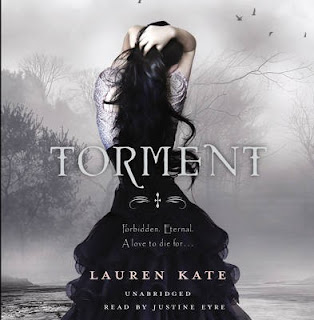 Notes: Contain spoilers for the previous book Fallen (but who hasn't read that yet?)

Review: I'm probably the last person (of those likely to read it) to have got to this one. Nudged by the release of Passion I set to it.

Torment takes place shortly after Fallen finishes and heroine Luce knows that Daniel is the love of her life(lives) and that every time she has a life she dies when she's 17, except in this life. Something's changed. For her own safety, as various supernatural beings want her dead, Luce is moved to a boarding school in California called Shoreline. Luce is kept pretty much in the dark about what Daniel's doing whilst she's there but the reader knows that there's a short-lived truce between the angels (eg Daniel) and demons (eg Cam). Daniel orders Luce to stay on the campus and is generally unhelpful and uncommunicative. Luce of course does not follow his orders and puts herself and others in danger.

At Shoreline she makes new friends and begins to get close to Miles, a nice guy who doesn't order her around! Also Luce begins to see the impact of the curse she's under, the effect her death has had on a long history of her own families. She also learns more about "the Shadows" that have haunted her all her life and begins to get the mastery of them.

Lessons continue and her love-life becomes complicated until another dramatic battle brings Torment to a cliff-hanging end....

I enjoyed Torment much more than Fallen where I found the behaviour of "the boys" Daniel and Cam to be annoying and patronising. This time Luce is standing up for herself and thinking about more than swoon-some kisses. She's developing her own skills and showing off her kindly traits. As it'd been a while since I listened to Fallen I was quite confused at first but slowly, as various new people had the back-story explained to them I got up to speed (I think). If there is anyone new to this series then it may be worth reading them closer together than I did! I'm still unclear on some things, such as why did Luce's previous boyfriends go up in flames and why were so many angels and demons attending Luce's previous school for reform students and is Daniel always the same age? Maybe there'll be more answers in Passion. I'll get back to you!
Posted by Karen (Euro Crime) at 09:15