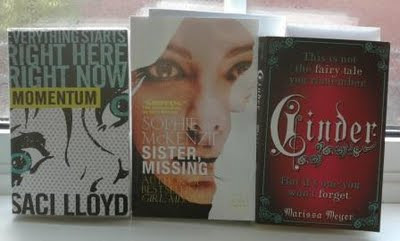 London, the near future. Energy wars are flaring across the globe - oil prices have gone crazy, regular power cuts are a daily occurrence. The cruel Kossak soldiers prowl the streets, keeping the Outsiders - the poor, the disenfranchised - in check. Hunter is a Citizen: one of the privileged of society, but with his passion for free running and his rebel friend Leo he cannot help but be fascinated by the Outsiders. So when he meets Outsider Uma, he is quickly drawn into their world - and into an electrifying and dangerous race to protect everything they hold dear.

It's two years after the events of Girl, Missing and life is not getting any easier for sixteen-year-old Lauren, as exam pressure and a recent family tragedy take their toll. Lauren's birth mother takes Lauren and her two sisters on holiday in the hope that some time together will help, but a few days into the holiday one of the sisters disappears, under circumstances very similar to those in which Lauren was taken years before. Can Lauren save her sister, and stop the nightmare happening all over again?

CINDER, a gifted mechanic in New Beijing, is also a cyborg. She's reviled by her stepmother and blamed for her stepsister's sudden illness. But when her life becomes entwined with the handsome Prince Kai's, she finds herself at the centre of a violent struggle between the desires of an evil queen - and a dangerous temptation.

Cinder is caught between duty and freedom, loyalty and betrayal. Now she must uncover secrets about her mysterious past in order to protect Earth's future.

This is not the fairytale you remember. But it's one you won't forget.