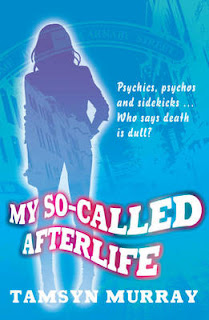 First Line: I knew it was time to move on when a tramp peed on my Uggs.

Review: Meet Lucy Shaw. She's a fifteen-year-old ghost stuck haunting the place she was murdered: the Carnaby Street men's toilets. Her boring afterlife starts to look up when, much to her surprise, one of the patrons is able to see her. Jeremy, a 27 year-old with no fashionable dress sense is about to turn her "life" around.

Through him Lucy gets to have a bit of a life with friends and an enemy and even a burgeoning romance but Jeremy is keen to help her move-on and begins the search for her killer hoping that that is the unresolved business tethering her to this plane of existence.

I enjoyed My So-Called Afterlife which despite its themes of loss, forgiveness and the murder storyline is a sweet tale culminating in an ending which brought tears to my eyes.

Lucy is sharp-witted character with a nice line in sarcastic and humorous comments though Jeremy is able to hold his own, in the main. The ghostly world is well thought out and given some rules which gives the characters some freedom but with an underlying restraint to their long-term mobility.

I found this a quick read and there's a lot of incident packed into its 180 pages. I believe My So-Called Afterlife should prove popular with younger teenagers and up. I'm looking forward to reading the next two books, which feature a new protagonist: My So-Called Haunting and My So-Called Phantom Lovelife.
Posted by Karen (Euro Crime) at 13:30