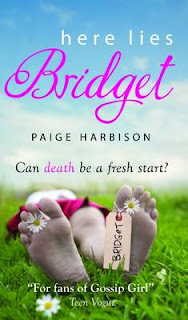 Review: This is a very gripping and enthralling read but it's also one where you want to yell at the main character to stop and think as her behaviour is so awful.

Bridget Duke is queen bee (where the b stands for you know what) at a small private school. She causes trouble for her step-mother, who looks after her as her Dad is always away, and her teachers, in particular Mr Ezhno. She's not much nicer to her two friends and she gets what she wants when she asks for it, even when she needs someone to cheat off in her exams. But she feels powerful and content despite the fact that her boyfriend Luke left her a year ago and she misses him still.

The first section of Here Lies Bridget details the crash and burn of Bridget's social standing when a new girl, Anna, threatens her popularity. Bridget's acting out has major consequences for Mr Ezhno in particular as well as her peers and step-mum. As well as current events we get to see important moments from her past which have set her on the wrong track.

In the second section, she's given a chance to atone in part for what she's done and she gets to see recent happenings through the eyes and ears of those she's hurt. Can Bridget rise to the challenge and be a nicer person and will she be given a second chance even if she does so?

I whipped through Here Lies Bridget horror-struck by this awful girl at first and then feeling ever-so slightly more sympathetic to her as one got glimpses of the nice girl she used to be; even in her worst state she occasionally tried to say the right thing but it came out in the wrong way and she was self-aware that how she was acting wasn't right. It was also fascinating to get more of the story through other people's eyes. The final few pages are tissue material as she tries to apologise to Luke, who's been her best friend since they were little. I enjoyed this book very much and it might give people like Bridget pause for thought if they recognise themselves.

Here Lies Bridget is an uplifting tale, in that it's never too late to say you're sorry.
Posted by Karen (Euro Crime) at 08:46