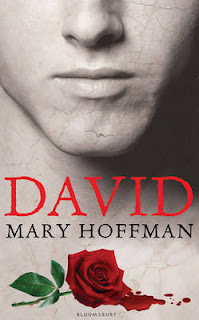 I'm very pleased to welcome Mary Hoffman to Teenage Fiction For All Ages today for the latest stop on the David blog tour.

My review of David is here

Over to Mary and More Italian favourites: 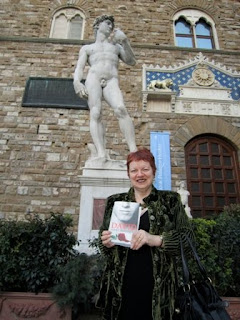 I spent half my life learning Italian, on and off but didn’t get serious about it until I took A level in 2000. We moved to Oxfordshire the following year and I found a wonderful weekly class in Oxford, called Reading Italian Literature. The idea was to keep up the language while having something more interesting to talk about than train time-tables.

So I’ve now been attending that class for ten years and have read so many books, stories and poems, written so many essays and had so many “assessed discussions” that I have collected enough CATs points to – perhaps – buy a toaster.

I have read literature that I had never come across before by authors I had not even heard of. And I have a fantastic teacher. In 2003 I won an essay prize that enabled me to go to Florence for a month on a course at the European Institute, in the lee of the great cathedral. That echoed something I had done many years earlier in my first summer vacation from university. Only at twenty I was a “beginner” and on the later occasion “level five.”

The main thing I retain from that course is that my Italian was much worse at the end than at the beginning – because I knew just how much I was getting wrong!

But still, I can now read a novel without using a dictionary, just for the story, So I have come a long way from the teenager on a beach in the Italian Riviera who had to converse with a boyfriend in a mixture of French and Latin.

Bidonario = someone who fails to turn up (literally an empty-water-container-carrier!)

Chiaroscuro = the use of light and shade in Renaissance paintings

Terribilità = the expression on David’s face

Two of these I read in my Oxford class, one for A level, one I read as a teenager – in English – and one I found for myself.

My favourite book by my most favourite Italian writer. When I first read it, I had to put it down after every paragraph or two because it so filled my head with ideas for books of my own. He had the most wonderful imagination and was always unpredictable.

I resisted this book for many years, thinking it would be just too unbearable to read. But the other students in my A level class chose it in preference to the Leopard (see below), so I had to. And I loved it. I voluntarily read The Truce afterwards and have read many other books by this great man, as well as four biographies.

This was my first set book on my Oxford course and it remains a great favourite. A good book on a serious subject: the moment in life when a person must act, in spite of his reluctance to get involved in politics.

This was the one I read when I was still a teenager and loved from day one. It was only on my course that I found out how reactionary Italian intellectuals consider it to be. (I still love it).

I didn’t rate this highly when I read it in English, finding it a bit Proust-lite. But when we studied it in my class, I was moved by it and bought the rest of the “Story of Ferrara” Bassani’s five linked novels.

When I was at university, this film, and Truffaut’s Jules et Jim, Resnais’ Last Year at Marienbad, Godard’s Alphaville – these were the smart art house movies you were supposed to like if you were clever. And I did like the Fellini; it is still, with Jules et Jim, my favourite film.

I saw this only a few years ago when it came to the art house cinema in Oxford, but it’s very close in spirit to the book.

This, like the Fellini, stars Marcello Mastroianni, at the opposite end of his career. Once a matinee idol, he is now able to be the paunchy, pouchy-eyed Pereira, the good man who is not prepared to do nothing and let evil prevail.

Gabriele Salvatores’ Io non ho Paura (I am not Scared)

This is another film based on one of our set books, this one by Niccolò Ammaniti, who collaborated on the screenplay. Both book and film excellent.

Sergio Leone’s A Fistful of Dollars

Does this even count? The first “spaghetti western,” starring Clint Eastwood, on whom I had a huge crush as a schoolgirl, when he was in the TV series Rawhide. Leone took a whole genre and invested it with elegance and style – something the Italians are very good at.

Many thanks to Mary and Bloomsbury for arranging this.