A couple of library books, some purchases and some unexpected (and 1) requested review copies: 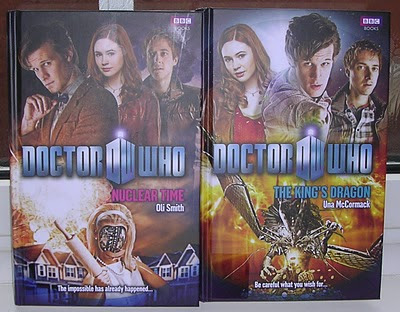 Doctor Who: Nuclear Time by Oli Smith
'My watch is running backwards.' Colorado, 1981. The Doctor, Amy and Rory arrive in Appletown - an idyllic village in the remote American desert where the townsfolk go peacefully about their suburban routines. But when two more strangers arrive, things begin to change. The first is a mad scientist - whose warnings are cut short by an untimely and brutal death. The second is the Doctor...As death falls from the sky, the Doctor is trapped. The TARDIS is damaged, and the Doctor finds he is living backwards through time. With Amy and Rory being hunted through the suburban streets of the Doctor's own future and getting farther away with every passing second, he must unravel the secrets of Appletown before time runs out...

Doctor Who: The King's Dragon by Una McCormack
They called it Enamour. It turned minds, sold merchandise, and swayed elections. And it did its job far too well...' In the city-state of Geath, the King lives in a golden hall, and the people want for nothing. Everyone is happy and everyone is rich. Or so it seems. When the Doctor, Amy and Rory look beneath the surface, they discover a city of secrets. In dark corners, strange creatures are stirring. At the heart of the hall, a great metal dragon oozes gold. Then the Herald appears, demanding the return of her treasure...And next come the gunships. The battle for possession of the treasure has begun, and only the Doctor and his friends can save the people of the city from being destroyed in the crossfire of an ancient civil war. But will the King surrender his new-found wealth? Or will he fight to keep it...?

(Strangely the third book in the set, The Glamour Chase by Gary Russell isn't even on the library catalogue.) 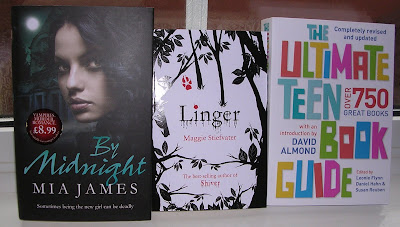 I took advantage of waterstones.com half-price offers on "dark romance".

By Midnight by Mia James
April Dunne is not impressed. She's had to move from Edinburgh to Highgate, London, with her parents. She's left her friends - and her entire life - behind. She has to start at a new school and, worst of all, now she's stuck in a creepy old dump of a house which doesn't even have proper mobile phone reception. Ravenwood, her new school, is a prestigious academy for gifted (financially or academically) students - and the only place her parents could find her a place, in the middle of term, in the middle of London, on incredibly short notice. So she's stuck with the super-rich, and the super-smart ...and trying to fit in is when the rest of the students seem to be more glamorous, smarter, or more talented than she is, is more than tough. It's intimidating and isolating, even when she finds a friend in the conspiracy-theorist Caro Jackson - and perhaps finds something more than friendship in the gorgeous, mysterious Gabriel Swift. But there's more going on at Ravenwood than meets the eye. Practical jokes on new students are normal, but when Gabriel saves her from ...something ...in the Highgate Cemetery, and then she discovers that a murder took place, just yards away from where she had been standing, April has to wonder if something more sinister is going on. ..and whether or not she's going to live through it ...More on the Ravenwood series can be found at www.ravenwoodmysteries.com


Linger by Maggie Stiefvater
In "Shiver", Grace and Sam found each other. Now, in "Linger", they must fight to be together. For Grace, this means defying her parents and keeping dangerous secrets. For Sam, it means grappling with his werewolf past ...and figuring out a way to survive the future. But just when they manage to find happiness, Grace finds herself changing in ways she could never have expected...

The Ultimate Teen Book Guide ed Daniel Hahn, Leonie Flynn
Following the success of the Ultimate Book Guide 8-12, people have been crying out for this guide to the best teenage books around. Again this is the only reference you'll ever need - covering everything that might interest teen readers, from those just starting secondary school through to readers looking for something more adult and challenging. The book covers classics through to contemporary young adult titles, best-sellers to cult fiction and graphic novels. We've got personal recommendations from top teen and adult authors including Anthony Horowitz, Meg Cabot, Philip Pullman and Jonathan Coe. Following the format of the previous guide, each entry is cross-referenced to other books that readers are bound to enjoy and there are readers' polls and special features on a variety of topics.

The Glass Collector by Anna Perera (February 2011, Puffin)
A contemporary, edgy story set amongst the Zabbaleen, a rubbish recycling community in Cairo, the story is a testament to the power of humility, love and support in the cruelest of circumstances. Fighting a war against greed, poverty and exploitation, 15 year old Aaron scrambles to pick out broken glass from the mounds of debris littering the streets of the city. Finding it increasingly impossible to live with his inherited stepfamily, the only pleasant side to his hard life is emptying the rubbish from the perfume shop where plain glass is replaced by glorious pink, purple and gold hued shades that endlessly entice him. However, with change beginning to creep into the Zabbaleen, Aaron’s circumstances become steadily more difficult and increasingly dangerous. Will he be able to find the strength to not only change his own life, but to change the lives of those he loves too?

Wereworld Rise of the Wolf by Curtis Jobling (January 2011, Puffin, UK debut)
‘YOU’RE THE LAST OF THE WEREWOLVES SON. DON’T FIGHT IT . . . CONQUER IT.’ When the air is clear, sixteen year-old Drew Ferran can pick up the scent of a predator. When the moon breaks through the clouds, a terrifying fever grips him. And when a vicious beast invades his home, his gums begin to tear, his fingers become claws, and Drew transforms . . . Forced to flee the family he loves, Drew seeks refuge in the most godforsaken parts of Lyssia. But when he is captured by Lord Bergan’s men, Drew must prove he is not the enemy. Can Drew battle the werecreatures determined to destroy him – and master the animal within?

Dead Man's Cove by Lauren St John (published 5 August, Orion Childrens)
When orphaned Laura Marlin moves from a children's home to live with her uncle in Cornwall, she longs for a life of excitement just like the characters in her favourite detective novels. A real life adventure is on hand as she is deposited at her uncle's spooky house . . . Why does her uncle, Calvin Redfern, forbid her to go to Dead Man's Cove? What's the truth about Tariq, the silent Indian boy who lives with the flamboyant Mukthars? Who is J? Who has left the message in a bottle for Laura to discover? Mysteries abound and who better to solve them than Laura Marlin, ace detective? Accompanied by her trusty companion, Skye, a three-legged husky, the dog she's always wanted, Laura's adventures begin.

Being Billy by Phil Earle (January 2011, Puffin, UK debut)
Faces flashed before my eyes. And for every face there was a time that they had let me down. Each punch that landed was revenge, my chance to tell them I hadn’t forgotten what they did. Eight years in a care home makes Billy Finn a professional lifer. And Billy’s angry – with the system, the social workers, and the mother that gave him away. As far as Billy’s concerned, he’s on his own. His little brother and sister keep him going, though they can’t keep him out of trouble. But he isn’t being difficult on purpose. Billy’s just being Billy. He can’t be anything else. Can he?