Lauren Laverne, whose first YA novel Candypop came out in May, was on Richard Bacon's Radio 5 show last week:

Lauren Laverne tells us why she thinks 6 Music was saved and reveals how similar the character in her new book - Candy Pop and the Broken Biscuits is to her.

The programme can be listened online for two more days or you can download the podcast for later listening. 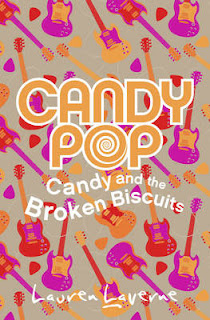 Join fabulously funny (undiscovered) rock chick, Candy Caine on a rollercoaster ride to the world's biggest music festival. A sharp, comic teen series from uber-cool presenter Lauren Laverne. Misunderstood musical genius Candy Caine - age fifteen - knows she's destined for a bigger life beyond her small-town existence. And now Mum is marrying The World's Dullest ManTM it's time to put plans into action and achieve world domination with her band, The Broken Biscuits. Oh - and find her real dad, who will most definitely be cool and, of course, will verify her own super specialness. With a battered old guitar and some supernatural assistance, can Candy get her life on track and her new band on the road to greatness? Candy Caine is the hilarious new creation of debut author Lauren Laverne - a writer who's been there, done that and customised the T-shirt.
Posted by Karen (Euro Crime) at 17:04