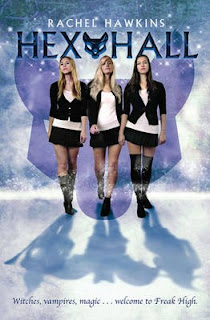 First Line: Felicia Miller was crying in the bathroom. Again.

Review: Hex Hall is the first in a series from debut author Rachel Hawkins.

Sophie Mercer has known that she's a witch for many years but her inability to keep a low profile has meant that her and her mum have lived in a lot(!) of places. Her latest spell - a love spell to help a bullied class-mate - goes magnificently wrong and so Sophie is sent to reform school - Hecate (Hex) Hall which is on an island off the Georgia coast - along with other misbehaving witches, fairies and shape-shifters ie Prodigium.

Her room-mate Jenna is the only vampire in the school and is suspected of murder by the rest of the school as Jenna's previous roomie, Holly, was found drained of blood with two neat holes in her neck. Jenna was cleared of the attack but mud sticks. Sophie has a run in with the three strongest witches - Elodie, Anna and Chaston aka The Trinity - who need her to join their coven and when she refuses they make life difficult for her. Then there's Archer Cross whom (nearly) everyone has a crush on but - would you know it - is going out with queen bee, Elodie. Throw in a formidable but actually quite friendly head-mistress, Mrs Casnoff, a spiteful defence teacher, Vandy and a persistent ghost and Sophie will have her work cut out to fit in and keep out of trouble, two things she usually finds herself unable to do.

Hex Hall sets the series up nicely. Sophie is a great character - funny and self-deprecating and with an unusual background which will play a big role in the future books. Archer looks to be a good match for her but he has secrets - which I look forward to discovering. I enjoyed Hex Hall very much, I raced through it and was was completely thrown by one of the big revelations at the end. There's magic, romance, witty dialogue and the introduction of a worthy enemy for the Prodigium - what more could one ask for? Well the sequel, immediately, but alas it's not out until 2011.
Posted by Karen (Euro Crime) at 13:36